Nasrallah Meets Khamenei in Iran, to Make Televised Address in May 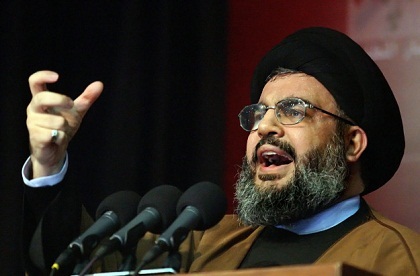 According to the news agency, Nasrallah held talks with senior Iranian officials during his visit to Tehran, where he met with Khamenei.

It pointed out that the “secret” visit was held two weeks ago.

Sources rejected in comments to the news agency to reveal the nature of the meetings held by Nasrallah or the details of his visit.

The news agency also reported that Nasrallah will have a televised appearance on May 9 on the occasion of the 25th anniversary of the establishment of Hizbullah's al-Nour radio station.

Nasrallah's last televised speech was on February 27 to deny rumors that he had been transferred to Iran for treatment after falling ill.

Media reports said that Iran and Hizbullah have played a role in supporting President Bashar Assad's regime against the rebels since the outbreak of the revolt in March 2011.

great - now we have to wait until may to find out if there is war or not .. lebanon is such a great county in the hands of nousraallah , assad, khamenii and aoun

The news agency also reported that Nasrallah will have a televised appearance on May 9 on the occasion of the 25th anniversary of the establishment of Hizbullah's al-Nour radio station.

lol his last record was falling on the records chart. it is time for a new album and they always find a holy occasion to give a speech. anniversary of al nour radio station is the occasion, are you kidding me? lol

I am sure the salafists are upset because their monopoly on issuing passports to heaven has been broken. I wonder if they share the same heaven or each have their own? The Mind is such a treasure, and those having a sane one are so scarce in our beloved levant.

He went back to his homeland for a vacation.

stay in IRAN you Iranian puppet

some go to iran others go to saudieh and both of them go here and there
at a certain degree all of our so called politicians are agents , muppets where their strings arte attached outside Lebanon

I doubt it. It is more to strategize on how to survive and thrive given the changes in Syria. He formed his own state within Lebanon and he is conducting his foreign policy (Summit).

we wait and see!

we shall wait and see!

It is not 3adeh! you are talking "the Sayyed Hassan Nasrallah and the supreme leader Ayatollah Ali Khamenei" what they say, they do... not just anybody else...

FSA should bomb his plane on his way back from Tehran. Fight terrorism with terrorism! Lebanon, Syria, and the world would be after withou him!

what is fantastic with moron M8ers like FT is that they criticize M14 leaders to go to KSA but never when nassy goes to iran... stupid people they are... never consistent with their opinions but rather adapt them according to what suits them best....

if they were really outrage by hariri going to KSA they should ALSO be outraged by nassy going to iran... but they say "3adeh"...

CONCLUSION: they are NO better than those they criticize despite their lecturing to others which prove their stupidity and hypocrisy....
so FT better SHUT UP.....

FT ,Hariri is in KSA or paris due to your M8 and allies want him dead.

facts are facts FT you are as demented as your general..i can only see M14 leaders been killed ....so prove me otherwise.

he was getting instruction on how to destroy Lebanon.

with the help of aoun and his sheep followers like FT....

Paul: It sure seems that way, but I am not so sure if all the blame lies fairly on the shoulders of the Lebanese people. The wealthy regional countries and their counterpart super powers have a lot to say who gets elected. If the don't succeed, then they assassinate our politicians.

Paul: well said re. "the solution is a all-faiths independent party with fresh faces and honest hard-working people".

Josh Bustany grew up in the USA most of his life. Unreal!!!

When I read the lebanese papersall I ever see are comments lamenting hesb influence and behavior. Every picture I see from lebanon shows everybody shooting his ak in the air ( never at anyone though). Why dont you each take your gun and shoot a hesb, instead of just complaining and waiting for Israel to do it for you ? They're not that careful, when they shoot you lebs, so you'd be wise to shoot the hesb yourself.

The logic: Just because one Sunni did something awful, automatically all Sunnis are bad. Nice one