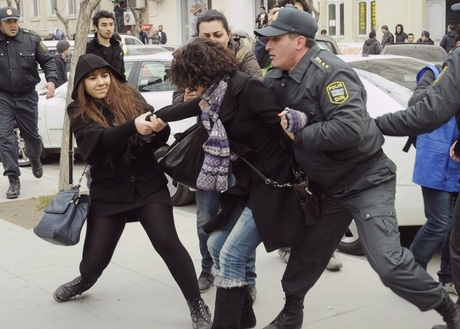 A Baku court jailed on Monday eight Muslim activists arrested last year after they clashed with police in a protest against a ban on the Islamic hijab for schoolgirls.

The activists were sentenced for five to six years in prison "for resisting and using violence against police, and disrupting public order", the court said in a statement.

The eight men were among 40 protesters arrested last October in the mainly Shiite Muslim country's capital, Baku, in violent clashes with police.

The Muslim headscarf is prohibited under rules that define what kind of uniforms pupils must wear in Azerbaijan, where the authorities have been seeking to prevent the rise of radical Islam.

After decades of Soviet rule, Azerbaijan emerged as one of the most secular states in the Islamic world, becoming an important energy supplier to the West and an ally in the NATO-led campaign in Afghanistan.