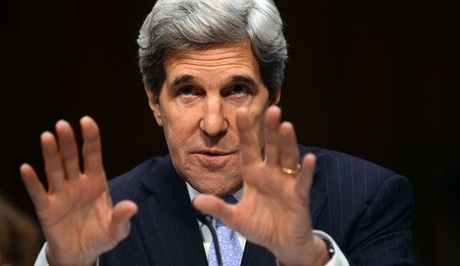 U.S. Secretary of State John Kerry said Israeli Prime Minister Benjamin Netanyahu had not been able to confirm to him on Tuesday that the Syrian regime had used chemical weapons against rebels.

"I think it is fair to say (the prime minister) was not in a position to confirm that in the conversation," Kerry said, explaining that he had telephoned Netanyahu following reports of their use.

"I do not know yet what the facts are," he told a press conference.

Earlier Tuesday, senior Israeli army officials said Damascus had used chemical weapons against rebels fighting to topple President Bashar Assad, a development which Washington has said would be a red line, completely changing the nature of the conflict.

"To the best of our professional understanding, the (Assad) regime has made use of deadly chemical weapons against the rebels in a number of incidents in the last few months," said Israeli Brigadier General Itai Brun, head of the research and analysis division of military intelligence.

Speaking to delegates at a Tel Aviv security conference, he cited an incident on March 19 in Aleppo province in which 31 people were killed.

Brun said the nerve gas sarin had apparently been used, adding: "The regime is also using chemical weapons that neutralize and are not fatal."

Kerry, plainly aware of the sensitivity of the issue, said that allegations made about the use of chemical weapons "have to be thoroughly investigated."

A spokesman for U.S. Defense Secretary Chuck Hagel, who is on a visit to Israel, was equally careful.

"The United States continues to assess reports of chemical weapons in Syria," Hagel spokesman George Little said in a statement.

He also warned the Assad regime against the use of chemical agents or allowing them to "fall into the hands of groups like Hizbullah which is backed by Iran and whose fighters are in action against the rebels."

Earlier Tuesday, Kerry told a meeting of NATO foreign ministers that the alliance must be aware of the threats from Syria, including the possible use of chemical weapons.

Stressing that he was not calling for any active planning, Kerry said "we should ... carefully and collectively consider how NATO is prepared to respond to protect its members from a Syrian threat, including any potential chemical weapons threat."

NATO has no direct role in the conflict but it has deployed Patriot anti-missile batteries along member Turkey's border with Syria to prevent any spillover of the fighting, Kerry noted.

The worsening conflict in Syria and the potential for it to spread to the region was a major talking point at the foreign ministers' meeting.

Maybe you mean the Israelis confirmed it, the Jewish Israelis, that is, but maybe that's the same as "the British". Remember, the Brits were the Celtic people running the "sceptr'd isle" when the Angles and Saxons invaded it and chased them up to the hinterland. Then the Norsemen drove the Anglo-Saxons into the heathen wastes and set up the feudal state we see today, as they also did in Russia about the same time. So why didn't these Norsemen call themselves Norsemen and these new states Norse states? Why doesn't Israel want to be a Palestinian state instead of calling itself Jewish and acting "English"? I think there is a deep strain of nostalgia in Norse culture, oh, remember the good old days when me and all my pals were such good fellows and we had the best slaves on the whole coast, and we ran everything so neat and clean.
It's becoming evident that Assad is cleaning house in Syria. The people are not stupid.

oh plzzzzzzzzzzz....they confirmed nothing .Netanyahu is power hungry and looking for an excuse..whats it to him if they did or didnt , like he cares about the syrian people