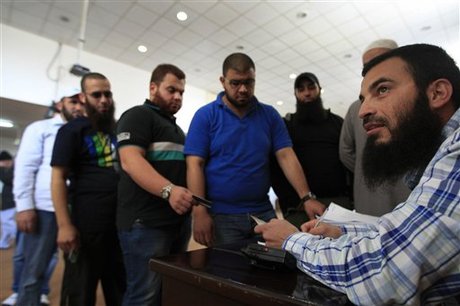 Controversial Salafist cleric Sheikh Ahmed al-Asir stressed that he will not withdraw his call for jihad in Syria, urging scholars and clerics to approve his fatwa to aid “the oppressed” in the town of al-Qusayr, southeast of Homs.

He pointed out that the creation of the “Free Resistance Brigades” began in the southern coastal city of Sidon and “we won't back down.”

“Jihad in Syria is a must, in particular in Qusayr, and anyone capable of doing so in Lebanon must join us,” Asir said.

On Tuesday, around two dozen men lined up in his office in Sidon, signing up to join the jihad.

"We were opposed to any side getting involved in the Syrian revolution. But Hizbullah's insistence to support the despot Bashar Assad has left us with no choice," Asir, one of Hizbullah's harshest critics, said.

Asir noted that he has previously warned, since the revolt in Syria kicked off in March 2011, from the repercussions of any military interference in the neighboring country.

“Unfortunately the state failed to act responsibly and its incapable. We will not remain mum,” the Salafist cleric added.

He pointed the number of people who so far signed in are more than 300.

At the beginning of the week, another Salafist cleric called on members of his community to wage "holy war" in Syria to defend their brethren.

Salafist cleric Sheikh Salem al-Rafehi and Asir accused Hizbullah of sending fighters to attack Syrian Sunnis, who make up the backbone of that country's rebellion.

However, Rafehi informed caretaker Interior Minister Marwan Charbel on Tuesday that he is ready to withdraw his call for jihad if Hizbullah ended its involvement in Syria's civil war.

Fighting has flared in Syria's Homs region in recent weeks as the government has pressed its campaign to stamp out rebel-held pockets in the area.

Lebanon is sharply split between supporters and opponents of Assad, a legacy of decades of Syrian political and military dominance over its smaller neighbor. The split largely falls along sectarian lines, with Sunnis opposing Assad and Shiites backing him. That mirrors the divisions within Syria itself, where mainly Sunni rebels are battling Assad's regime, dominated by the Alawite sect, an offshoot of Shiism.

loooooooooool..he has a brain doesnt he....oops i guess not..if he did not want to do it he wont do it..but is bank account is flowing with BENJAMIN's right now , he wont care loool

HA is acting as a world superpower and has shown that it is the state of lebanon and not a statelet. Sending troops and heavy artillery into syria to defend "Shia" villages is a feeble excuse of a much bigger iranian objective. Defending Shia or any other sect is the responsibility of the syrians and their government. Otherwise, what will stop anybody from sending armor and personnel to defend their so called communities any where in the world!

The cave man again,,,,, always in the wrong place

I hope many of them would register! that will be a good rid!!

i don't like him but everything he say is true..

i leave the jihad for your kind FT

They look out of shape to fight.

Correction: they are in excellent shape physically and mentally. LOL

thank you hezbollah.... now we have two stupid islamists parties in lebanon....

I secod that: thank you hizbushaitan for pushing these extremists to do it.
wars start with extremist for 2 sides, and we now have enough for a civil war.

I asked Nostrabenzona, an expert on matters of geography and geology, about which distance is shorter, that from Sidon to Israel or that from Sidon to Syria. Nostrabenzon answered by saying that the "ASSad" regime was about to collapse any minute for the 7453rd time since he and GabbyMarch14 began communicating with the Almighty in or around 2005. This is so promising that these two shall soon walk barefooted and hand-in-hand to Damascus to witness the landing of cheikh Saad al-Haribi Telteyn al-Marajil's private jet at the airport there on his way to Lebanon as the great conqueror of modern times.

This thug Asir talks like a graduate from West Point or Sandhurst military academies. Send him some perfumes to clean his rotten beard

who is he to silence him !!! he is nothing but a low scum bag, seeking attention, let him bark as much as he likes