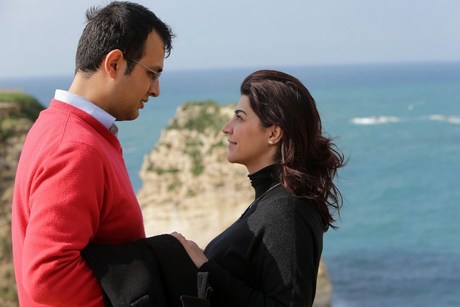 "By this, Succariyeh and Darwish's union becomes the first civil marriage registered in the records of the Directorate General for Personal Affairs in Lebanon,” the NNA noted.

Charbel, however, pointed out: “Their religions must not be changed and the couple's marriage would follow the laws of personal affairs that their sects stipulate, awaiting issuing a code that governs optional civil marriage in the country.”

He explained that this is because there are no texts concerning divorce, inheritance and kids for “people with no religious affiliation.”

Following the spread of the news, President Michel Suleiman congratulated the couple via Twitter over the official registration of their civil marriage.

Speaking to LBCI television, Darwish described the registration as "the first victory for the civil state in Lebanon, the state we all dream of".

He echoed calls for a state for all its citizens in Lebanon, rather than a nation fractured along sectarian lines.

"I am very happy today, and I never had any fear that my marriage to Nidal would not be legal," Succariyeh told LBCI.

"This is Lebanon's first historic step" towards institutionalizing civil marriage, she added.

mabrouk to all Lebanese :)
there is no need from now on for this debate: it is now legal to have a civil marriage.

Indeed congratulations for Khouloud and Nidal and hopefully this will be the first nail in the coffin of sectarianism and religious figures' control of our destiny.

What a beautiful and inspiring couple, Meat alf mabrouk.

What's going to happen to the great mufti? To Rahi? To Sanioura or Aoun or Jumblatt? They all rely on the hostages (na7na) for their payrolls.

I have lived in a liberal part of the U.S. for many years. Those of you who are lauding this step don't fully understand its implications and are unable to separate religion from religious figures. You believe that if religion is removed from the equation, human goodness will dictate. This is a slippery slope; close behind is gay marriage and the elimination of marriage as a prerequisite familial institution.

This “marriage” is held together by a flimsy human commitment. History has shown that this is grossly insufficient. Once God is removed, humanity suffers. Any suffering in sectarian societies has been due to the defiling of God’s image.

For all of you who are currently in favor of civil marriage, take a long hard look and realize the difficult challenges that your children will deal with as a direct result. Lebanese have existed for thousands of years due in no small part to their strong religious and familial institutions. Once this goes, everything else will follow.

"Lebanese have existed for thousands of years due in no small part to their strong religious and familial institutions. Once this goes, everything else will follow."

religion is destroying lebanon.... every leader believes he is the voice of his religion! lol
all the religious people in lebanon are maintaining people under their influence to hold on to their powers and privileges...

so NO, civil marriage will not destroy a society already destroyed and living in the middle ages thanks to the different religions... on the contrary it will be the first step towards a more advanced society!

Peace- don’t waste your time arguing with them. These are the same people that are trying to convince us that by limiting who I am allowed to vote for they are protecting my right. I don't think they can ever understand that you have every right to disagree with people but you don't have a right to impose your will on people

How could a mufti reject and issue a so called fatwa to civil marriage when they have such blasphemy as 3erfa marriage and apparently it has been okayed by God, twat. Partition please

Phoenician, you keep bringing up 3erfa, do you know what 3erfa marriage is? It is NOT met3a which does not exist in islam. In islam, the man has full responsibility for paying for everything the household needs, including his wifes food, clothes, doctor bills etc. 3erfa marriage means that a man and a woman can agree to be married with the wife abstaining from this right until the husband can afford to support her financally. In other words, its a real marriage but made adaptable in special cases only. This sort of marriage is only as a last resort for a man who fears he will fall in to temptation yet can not afford to get married (such as an 18-year old student to give you an example).

Go to Makkah ya mufti. If you want to live in stone age?..let Lebanon be free of all religions.

P.A.R.T.I.T.I.O.N
and I dont say it to insult anybody, this is the solution for our LEB. problem. Let the religious be religious and the monk be a monk and most importantly let the others live in peace!!
All Saints on the ground dont want partition coz they know deep inside that a religious state is not viable after year 2000... ull have the specimen of New York living side to side to kaboul under the same sky, so religeous men of all confessions dont want this coz they talk about GOD and they are all struggling for a bigger piece of cake like any other non-believers.. Open your eyes people! They want to keep control over the society .. as simple as that!

In the last 15 years I noticed Lebanese becoming more fanatical in their support of their sects. I see my family that was raised secular (Christian) becoming religious zealots. My Sunni friends that used to enjoy an alcoholic drink and a little za3raneh let their beards grow and are now praying 5 times a day. The world is moving forward and we are going back to the middle ages.

This step is great and should be applauded.