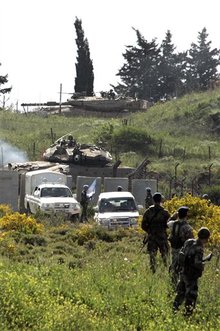 An Israeli man was arrested by the Lebanese army on Wednesday after he crossed the border fence between Israel and Lebanon in Ras al-Naqoura, Lebanon's National News Agency reported.

“Lebanese army intelligence agents are interrogating the Israeli man who was arrested after crossing the border fence,” the Beirut-based, pan-Arab television al-Mayadeen reported.

Israel and Lebanon are officially in a state of war and the travel of individuals between the two countries is prohibited.

Meanwhile, MTV said "the behavior of the detained Israeli is abnormal and he only understands the Hebrew language and security forces are awaiting a translator."

A statement released by the Lebanese army later on Wednesday said "at 3:00 p.m., a patrol belonging to the Intelligence Directorate arrested an Israeli man after he crossed the technical fence and the Blue Line in the al-Labbouneh border area inside Lebanese territory.”

“The detainee is being interrogated in the presence of an officer from the United Nations Interim Force in Lebanon (UNIFIL) with the aim of unveiling the circumstances of the incident,” the statement added.

Al-Manar television quoted a Lebanese security source as saying that "the name of the arrested Israeli man is Simon Saadati and he's 34 years old."

According to one report I read, his mother claims that he is mentally distured and was so in the country of his birth Ukraine, before he emigrated to Israel, so your comment on him being an Arab Israeli is wrong.

I do not think there are very many people born in Ukraine with family name "Saadati".

His name is Simon Sa'adati. He was not born in Ukraine, rather pulled the same disappearance act while in the Ukraine a while back. He's mentally disturbed according to his mother.

A very good decision to add this subject to their training.

Back in the 50s and 60s Hebrew was taught as second language at the Arab univeristy of Beirut.

Who's our government or the Israeli government to forbid people from seeing each other?

It's even worse between the two Koreas with split families.

I wonder if the man would have been shot by Israeli guards had he walked from Lebanon to Israel..... I'm guessing so, as it would be in line with their policy of 'shoot first, ask questions later'

Asaf He is NOT an Arab Israeli. He is a Palestinian Israeli

I know it doesn't add up, but anyone crossing to HAland adds up to more than 1.