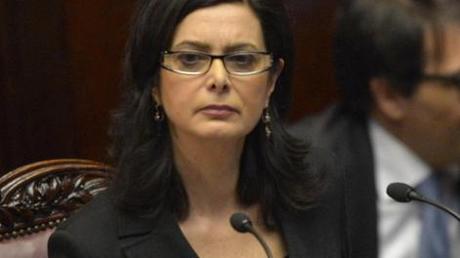 Italy's speaker of the lower house of parliament Laura Boldrini on Friday denounced threats made against her since her election to the post in March and called for a law to defend Italian women from misogynist and violent acts.

"I am not afraid to open a battle front," Boldrini told Italy's La Repubblica daily after receiving hundreds of menacing messages on the Internet, including photos altered to show her head on the bodies of women being raped or strangled.

Those sending threatening messages to women in Italy are in their "thousands and thousands, the number grows day by day, and they represent a part of the country which we cannot ignore," she said.

"It's not an issue which affects me alone. When a woman occupies a public role, sexist attacks are unleashed against them," she said, adding that "it is an emergency situation in Italy, because women are being killed by men every day."

Boldrini said the issue must be dealt with urgently "at an institutional level."

Her comments struck a chord in a country which has been battling in recent years with a growing awareness of the abuse of women by boyfriends, husbands or ex-partners.

In 2012, some 120 women were murdered in so-called femicide attacks, and a third of all women in Italy are victims at some point of domestic violence according to a United Nations report, which cited data from the national statistics agency (ISTAT).

Pages and pages of threats against Boldrini have been left by people on websites and social networks.

"You live 30 kilometres (18 miles) from my house, I promise I'll come and find you," reads one, while another says: "I will handcuff you in a dark room and use you like a urinal, you will drown."

Rome's public prosecutor's department opened an investigation into the threats on Friday.

"The political world must be courageous, it must act," Boldrini said.

Several top politicians spoke out in the speaker's support.

"Hundreds of men, vile and without dignity, who consider it normal to insult and threaten a woman for her own opinions - indeed, probably just for the fact that a woman dared to express ideas - are a sign of a subculture that must be uprooted in this country," German-born Idem said.

Boldrini "is a courageous woman denouncing the constant humiliation of women on the Internet and in everyday life. We are by her side," said Nichi Vendola, the head of the Left, Ecology and Freedom (SEL) party of which she is a member.

Nils Muiznieks, European commissioner for human rights, said that "the Italian authorities must send a clear signal that verbal attacks cannot exist in a democratic society."

Its a shame how many sick retarded men there are out there. Men who have such hate or arrogance towards women should be executed for the sake of humanity.