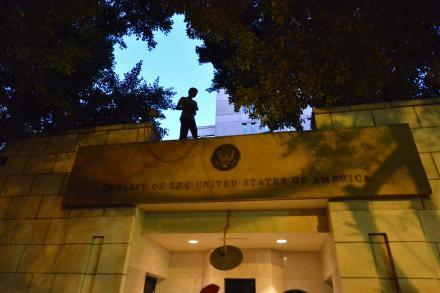 An American was stabbed in the neck as he came out of the U.S. embassy in central Cairo on Thursday, a security official told Agence France Presse.

The American was rushed to hospital after the attack in Cairo's Garden City neighborhood near Tahrir Square, which houses several embassies and has seen a rise in crime and unrest in recent months.

Police guarding the embassy managed to arrest the assailant, described only as "an unemployed man" by the security official, who requested anonymity.

The motive for the attack and the condition of the victim remain unclear.

"At 12pm, a private U.S. citizen unaffiliated with Embassy was stabbed nearby. The victim is in the hospital. Police have suspect in custody," the embassy said on Twitter.

Insecurity has surged in Egypt since the 2011 uprising that toppled Hosni Mubarak, with a rise in reported robberies and random crimes.