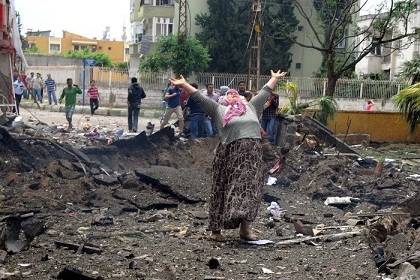 Iran has condemned as a "savage terrorist crime" twin car bomb attacks which killed 43 people and injured dozens in a small Turkish town near the Syrian border, media reported on Sunday.

The state broadcaster's website quoted Deputy Foreign Minister Abbas Araqchi as saying that "confronting terrorism is the duty of all countries".

"This act was a savage terrorist crime and such crimes which target ordinary people are condemned everywhere in the world," Araqchi said.

Saturday bombings occurred in the town of Reyhanli in southern Turkey near Cilvegozu, one of the main Turkish hubs for Syrian refugees and rebels.

The border area has witnessed a number of deadly attacks as the conflict in Syria spills over into Turkey, whose government has become one of the harshest critics of the Damascus regime.

Turkish deputy prime minister Bulent Arinc labeled the bombings the deadliest attack in Turkey since the beginning of the conflict in Syria and suggested President Bashar Assad's government may have had a hand in the killings.

Iran has remained a steadfast ally of Assad throughout the Syrian conflict which the United Nations says has killed more than 70,000 people since it erupted in March 2011.

It regards many Syrian opposition groups as "terrorists" in the pay of Western and Arab countries.