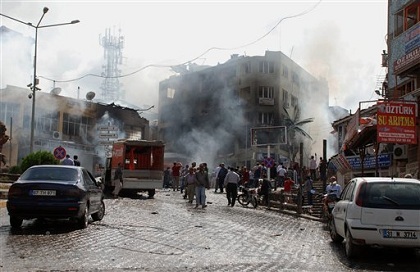 "The Syrian National Council condemns in the strongest terms the cowardly crimes carried out by collaborators of the Syrian regime in the Turkish town of Reyhanli," said the group, an influential faction within the leading opposition National Council.

Saturday's attacks in the border town of Reyhanli killed at least 43 people and wounded 100 more. Ankara blamed pro-Assad groups and vowed to bring the perpetrators to justice.

Turkey, a member of NATO, distanced itself from its former ally soon after Assad launched a crackdown on pro-democracy protests in 2011.

Ankara has since become a rear base for the Syrian opposition and the regime in Damascus has already been blamed for previous attacks on Turkish soil.

"What happened in Reyhanli... proves the extent of this murderous regime's criminality, and of the danger it poses to its neighbors, peace and stability in the region," said the SNC.

Turkey hosts at least 326,000 Syrians forced to flee the conflict in their country, the U.N. says.