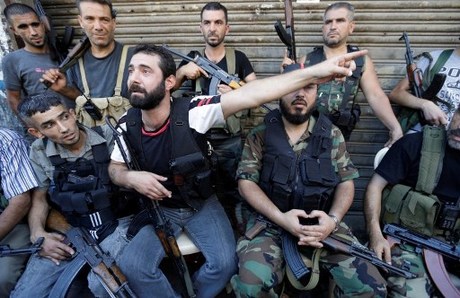 Clashes renewed in a fierce manner in Tripoli on Tuesday afternoon, leaving at least four people dead and several others wounded, as the Arab Democratic Party declared an open battle and warned that it “will not let Tripoli sleep.”

The National News Agency said Mohammed Rashid Soltani, 30, was killed and two other people were wounded, identifying them as Yehia Seif Obeid, 81, and Khaled Mohammed Mohammed, 33.

Meanwhile, Future TV reported that “Abu Ridwan al-Asmar, the muezzin of Bab al-Tabbaneh's al-Jihad Mosque, has died of his wounds."

And as MTV said "Mohammed Mahmoud al-Asmar was killed by sniper gunfire in Tripoli," Voice of Lebanon radio (100.5) said "Ahmed al-Bunni was killed at Jabal Mohsen's al-Amerkan Square after receiving a bullet in the neck."

As the situation deteriorated, a mortar hit an army base on al-Ghoraba Street while another fell on an army base in al-Zahriyeh, leaving a man from al-Tiba family wounded.

“Multiple rocket launchers were deployed in Jabal Mohsen as a prelude to escalation," Voice of Lebanon radio (100.5) reported.

Clashes also intensified in al-Baqqar, al-Qobbeh and al-Mankoubin as Bab al-Tabbaneh's residents started evacuating their homes and the army withdrew the vehicles that were deployed on Bab al-Tabbaneh's highway near al-Qasr Bakery.

On the political front, Arab Democratic Party media officer Abdul Latif Saleh said: “We will show them who are the cubs and lions of Rifaat Eid and we will cut off the hand that attempts to target Jabal Mohsen.”

“The same as our children cried, Tripoli's children will cry and they will see our actions in the coming hours,” Saleh threatened in an interview on al-Mayadeen television.

In another interview with LBCI, Saleh said: “We have entered the fight and we will not let Tripoli sleep.”

Meanwhile, Rifaat Eid, the party's secretary-general, wrote on his Facebook page: “An eye for an eye, a tooth for a tooth and the initiator is the aggressor … Enough is enough, now you will hear the roar of Jabal Mohsen.”

"Does the state want to defend Tripoli or not?" Kabbara said, reciting a statement issued after the meeting.

"The threats of Assad's party (Arab Democratic Party), which were later executed, are a blatant crime that is tantamount to mass murder against an entire people and they deserve the death penalty. Rifaat Eid and Assad's shabiha must be arrested," Kabbara added.

"How can some shabiha kill the city's residents without being held accountable?" he went on to say.

He noted that the chiefs of security agencies know that "Assad's party in Baal Mohsen is the aggressor."

"So how can they be lenient with the murderer and firm with the victim?" added Kabbara.

"Tripoli calls on the state to restore its security and stability and defend it against the shabiha of (Syrian President Bashar) Assad and (Hizbullah chief Sayyed) Hassan Nasrallah who are killing the Lebanese and Syrian peoples," he said.

If hizbocrap and ASSad weren't in trouble in Qusayr they wouldn't be getting Jabal Mohsen to create tensions to draw attention away from their defeat there...

jabal Mohsen will be totally destroyed.

May be its a good thing. Kill each other and rid us of your filth.

and can these stupid children tell us what they will gain from these battles? only dead people on both sides, chaos, destruction... no one will win , everyone will lose...
tfeh on both sides!

so true tfeh. a thousand times over. What all these people who are causing so a riot on all sides fail to see is that the creator created all types of human beings. of all relgions and colours. The beating on breasts that we are better than them is only serving to destroy the fabric of the human race. They just dont know how to get along with those that are not like them . AND this goes for all parties. TFEH.

Rocket launchers? Is our army allowing it? That's exactly why Hizballa should be disarmed...because we say no to double standards. God bless our army!

The army should disarm Ali Eid and his thugs and station the army to protect Jabal Mohsin from any attack. Soon after, they should do the same with the rest of Tripoli.

Why would be concerned? let them filthy people kill each other- and this time let them go at it until the end, don't negotiate a cease fire 2 days from now

I am concerned because when you see fire burning thorny bush and precautions are not in place, sooner than soon the same fire will engulf Cedar trees, olive orchards and our homes. We all know how wars start but we never know how it grows or how/when it ends. Better to contain it when it is small before it burns us all.

FT - you really have never been in Tripoli and Jabal Muhsin. Jabal Muhsin is armed to the teeth and has a commanding view of all of Tripoli. During the siege of Tripoli by Syrian forces and the subsequent massacres, the thugs of Rifaat Eid committed horrendous crimes. That is why the assads and the eids are hated in Tripoli.

Eid is a thief and thug in 1989 he stole my friends car in north Lebanon and drove it all summer before him before sending it to Syria! (true story)
those are Assad's people of 3ouroubeh and moukawameh!

but M8 thanked syria no? Lol!