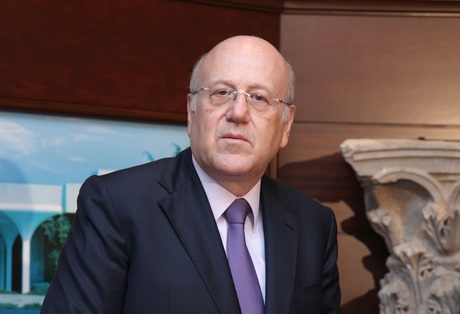 Cabinet approved on Monday holding the parliamentary elections according to the 1960 electoral law on June 16.

Caretaker Information Minister Walid al-Daouq confirmed that it approved the necessary measures and a treasury loan worth L.L. 22 billion in order to hold the elections.

Caretaker Prime Minister Najib Miqati said after the session that was held at the Baabda Palace: “We completed today all the legal measures to stage the elections based on the active law.”

The fate of the elections now lies in the hands of parliament, he told reporters.

“Our duties obligate us to perform our duties according to the active 1960 law,” he said of the law that has been rejected by the majority of political powers.

“We will continue to perform our duties until a new government is formed, which I hope will take place as soon as possible,” Miqati continued.

An amended version of the 1960 law was adopted during the 2009 elections, but its adoption for this year's polls has been rejected by a number of political factions.

This has not however prevented officials from submitting their candidacies to the elections based on this law in order to avoid uncontested victories.

The powers have also so far failed to reach an agreement over a new electoral law, which is threatening to delay the polls.

The final decision to hold the elections will be determined by parliament the term of which ends on May 31.

Should its mandate be extended, the elections will be postponed.

Media reports said Monday that a preliminary agreement had been reached among major political parties to extend the mandate to the autumn of 2014.

The AMAL movement, Hizbullah, and Progressive Socialist Party leader Walid Jumblat have agreed on the extension, while al-Mustaqbal bloc chief MP Fouad Saniora expressed readiness to provide an answer to the proposal on Monday.

Hizbullah has meanwhile expressed readiness to try to convince its ally Free Patriotic Movement leader MP Michel Aoun to agree to the extension.

Commenting on the extension, Miqati said after the cabinet session: “The government does not have a say on this matter.”

He revealed that he has prepared an initiative, which he will reveal in the upcoming days, to help return political powers to dialogue.

“Each official is expected to offer a proposal to resolve pending disputes. I took the first initiative through resigning,” he said.

I thought The axis of resistance would not even approve forming the electoral committee to oversee the elections and accused Suleiman of undermining Christian rights:))))???? What changed now. Why is the FPM so quiet?

"the State of Hezbollah" aka "hezbollahstan" is an entity completely independant from the so called "Lebanese Republic". And since the "lebanese republic" is neutral, with no odor and no color, this explains the absence of initiative of lebanese officials regarding Hezbollahstan's declaration of war on Syrian "terrorist groups"..... Makes sense ?

those who support a group in the up coming elections now expect to get a free airline ticket to the motherland to vote.. Damn i better join a group.. free ticket.. never say never

And the FPM mouthpiece speaks. Lol. How is the attempt to legitimize an illegitimate resistance with your 'moderate, balanced' Aounist propaganda?

But lets not believe everything we read or better yet see with our own eyes. I'm sure FT and Mowaten will try to rationalize it. A few weeks ago we were told not to believe HAs presence. Now they re moving towards justifying it.