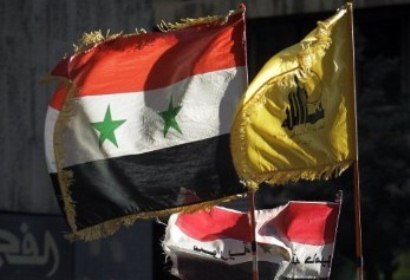 Gulf Arab states will consider placing Hizbullah, which is openly involved in the Syrian conflict, on its terror list, al-Rai daily quoted highly placed diplomats on Thursday as saying.

Bahrain will ask foreign ministers of the six-nation Gulf Cooperation Council to discuss "placing Hizbullah on the terror list" at a meeting in Jeddah, Saudi Arabia on Sunday, the newspaper said.

The paper did not say whether this referred to the party as a whole or just its military wing, whose men are fighting alongside government troops in a fierce battle to retake the Syrian town of Qusayr from rebels.

The ministers will also discuss Gulf security, "continued Iranian threats, especially the busting of Iranian spy rings," in a number of GCC states.

Kuwait has already convicted several Iranians and one of its own citizens for operating a spy ring for Tehran, while Saudi Arabia and Bahrain have said they busted cells working for the Islamic republic.

On Monday, Bahrain on Monday banned opposition groups from all contact with Hizbullah, a month after branding the movement as a "terrorist organization."

Hizbullah, like Iran, is a close ally of Syrian President Bashar Assad.

Gulf states have repeatedly accused Iran of meddling in their affairs, a charge the Islamic republic categorically denies.

More than 94,000 people have died in Syria since protests erupted more than two years ago and morphed into an armed conflict after being brutally repressed.

an extremely strong message was given by Obama to Suleiman last week: hizbushaitan must withdraw immediately from Syria or else.....
of course hizbushaitan will not withdraw which will lead to their annihilation soon....
by the way guys, with all the help of hizbushaitan, iran, chemical weapons, .... qusayr is still resisting against all odds.

Mowaten - laugh all you want. It will not be over with Qusayr and the Hezb will pay.

No need of a May ,, Hezbollah has shown that is nothing but a bunch of mercenaries

what are they waiting for. Hizbullah is the armed extension of the wilayet el fakih ready for everything to enforce the antagonism between shia and sunnis.

Lebanon should do the same. That would be the last nail on the coffin.

Because they are fighting in support one of the most repressive regimes in the world. Even Moqtada Sadr (no bleeding heart) questioned the hezb support for this monstrous regime.

Do you really believe this trash? The Hezb is involved because it received direct orders from iran to do so and to the detriment of Lebanon. This is making the country more polarized and making the country into a target. The only attacks on lebanese villages the last couple of years were from regime forces - not the opposition. We are playing a game that is bigger than Lebanon and we have a high probability of being burned. If KSA decides to heavily invest in a militia to counter hizb in lebanon, kiss the country goodbuy.

The_roar: you are the one living in fantasy land. Before the Hizb involvement, how many attacks were launched on lebonon by the oppsition? Compare that to the many artillery strikes by regime forces against lebanese villages. As for hezb prowess, there is no debating that but this came with billions of dollars of iranian money and weapons and could be replicated by other communities in lebanon - if external support is available. If this happens, you can kiss lebanon goodbuy. As for treason: your definition is weired. The hizb stormed beirut and unseated a government. They only recently threatened to overturn the appointment of a government by force. In any self-respecting country, this is treason.

The_roar: you are the liar and you are the one propagating hate. Check your posts and check mine. For youn, lebanon is filled with "traitors" simply because they oppose the Hizb takeover of the country, just because they want a real state with a strong army who has a monopoly over arm, just because they do not want a militia that is beholden to a foreign power to take them to war irrespective of what the lebanese goverment.

yes rafehh one must be careful with this very old trick to get rid of his opponents: say they are traitors and sold to the enemy... it has worked in ALL dictatorships and it is the exact same rhetoric taken by aounis and hezbis: if you are against hezbollah means that you are a traitor and an israeli... typical speech of a totalitarian and extremist mind... they have nothing to envy the salafis , they have the same mindset! LOL !!!

given that you can never discuss with those people as they will always say you are a traitor even if you are right.... only because you are against them! bring them facts: they say it s fabricated... bring them objective news: they say it s western or israeli propaganda...
one example? FT claimed that a document from the UN was better source than the source itself: lebanese ministry! LOL
best thing say: yes to all they say and like little children they ll be happy!

Why dont they put also Ahmadi Najad on terror list?

why not place more resources into things like education, 24 hour electricity, more security, make the country more secure from within and make it a place where people want to stay or even return instead of making it another gaza strip? We need law and order, not to enter the global arms race.

the roar: already forgotten that aoun claimed that for decades that hezbi were terrorists? LOL....