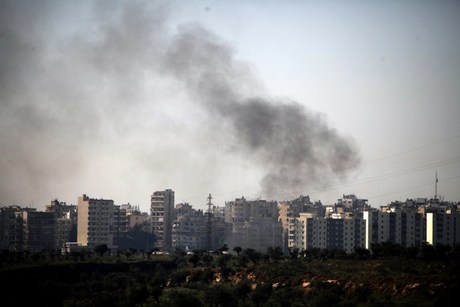 The death toll in the renewed rounds of fighting in the northern city of Tripoli rose to five on Monday afternoon, after cautious calm in the morning.

"A man from the Zaizoun family was killed by sniper fire in Tripoli's al-Riva," MTV reported.

It later reported that three army troops were also wounded by sniper fire in the city.

Meanwhile, "two people were killed when a car leaving Jabal Mohsen came under gunfire, as three other people managed to escape unharmed in an army armored vehicle," Voice of Lebanon radio (93.3) reported.

Earlier, NNA said snipers “fired on anything that moved” in Bab al-Tabbaneh, Jabal Mohsen, and mainly al-Zahrieh area and the international highway that links Tripoli to Akkar district.

Despite the sniper fire, there was limited traffic and most markets, shops, schools and university campuses opened their doors in Tripoli.

The renewed fighting between the rival neighborhoods on Sunday night left one person dead and 14 wounded.

But on Monday four more people died from sniper fire and the number of injured individuals rose to 29.

Sunday's clashes erupted at around 7 p.m. as gunmen used light arms, machineguns and rocket-propelled grenades to fight it out.

A recent round of violence pitting the Alawite backers of Syrian President Bashar Assad's regime against Sunni supporters of the uprising, had left 31 people dead.

The gunbattles came as the army brought in reinforcements and responded to the sources of fire, NNA said.

Despite the military's efforts to stop the fighting, gunmen from both sides deployed in the narrow streets of the troubled neighborhoods and engaged in the deadly clashes.

A word to describe some who are involved: IGNORANT !!!!!!

It is easy to fix the problem .Just gas Tripoli.

Thank you for reinforcing my opinion about you :D You assumed that I'm from the Islamic religion when I'm not. Your're IGNORANCE is Biblical!!! Only IGNORANT creatures like yourself generalize emotions of hatred!!! Get some help if you have trouble understanding what I'm saying ;)!!!

Only IGNORANT "things" use insults to combat reason, but please be my guest!!! Creatures like you are so easily influenced, not to mention, manipulated!!! You, and those like you are very predictable and IGNORANCE is part of your biological coding, so don't be too hard on yourself. This is just a response to the IGNORANT comment that you made...

FT , maybe you can enlighten us and give us some examples of non Muslims people blowing themselves up and calling themselves martyrs.

Here are some definitions that may be useful from "dictionary.com"
Please don't use what you consider to be big words when you don't know what they mean!!! Please!!!

Bigotry: stubborn and complete intolerance of any creed, belief, or opinion that differs from one's own. (You and those like you; the IGNORANT)

Deduce:to derive as a conclusion from something known or assumed; infer. (What is used for critical analysis and how I made my assumption)

Thank you for coming to his/her rescue :D IGNORANT creatures tend to stick together :D Again you fail to respond to my comment (It's ok because I don't expect much from IGNORANT creatures) You just Keep at it because it doesn't make any difference other than the fact that you expose your IGNORANCE more and more.

Apparently FT has disappeared once more and hasn't responded!!! So sad ;(!!! They can't have an intellectual conversation and I'm not surprised.

This is why he gets thumbs down.

brought for you : "Mental Health Therapy"

Lebanese army is a red line ya wled el bala!

So am I, yislam Hal toum.