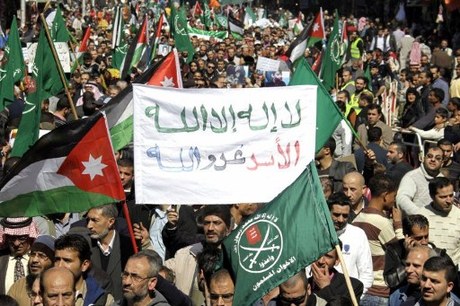 Jordanian prosecutors on Tuesday charged 13 men with carrying out "terrorist" acts for their alleged roles in riots in the southern city of Maan over a double murder there.

Military state security court prosecutors accused the 13 suspects from the restive city of carrying out "terrorist acts by using flammable materials (in the riots) as well as rioting and unlawful assembly," a court official told Agence France Presse.

Security forces arrested the men on Monday after riots erupted a day earlier over the murder of two men in the city.

Angry rioters, who torched shops and the post office, accused police of failing to arrest those behind the murders last week.

Businesses and shops in the city closed for two days in a row as part of civil disobedience, but "things are back to normal today (Tuesday)," a resident told AFP.

Police said investigations were still under way, insisting that the video footage had been fabricated.

Maan's rebellious past dates back to the beginning of the past century, when it was the seat of the Great Arab Revolt that crushed Ottoman rule.