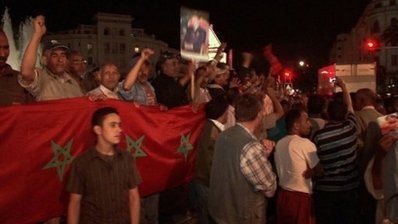 "The national coordinators (of the movement) have called for a demonstration Sunday for a truly democratic constitution and a parliamentary monarchy," a member of the movement's Rabat section told Agence France Presse.

"The plan as proposed by the king yesterday (Friday) does not respond to our demands for a true separation of powers. We will protest peacefully on Sunday against this plan," he said.

The king outlined curbs to his wide political powers in an address to the nation on Friday and pledged to build a constitutional monarchy with a democratic parliament.

The proposals, to be put to a referendum on July 1, devolve many of the king's powers to the prime minister and parliament.

They come in the wake of nationwide pro-reform demonstrations that started on February 20 -- hence the name of the movement -- inspired by other popular uprisings sweeping the Arab world.

The 47-year-old monarch, who in 1999 took over the Arab world's longest-serving dynasty, currently, holds virtually all power in the Muslim North African country, and he is also its top religious authority as the Commander of the Faithful.

These are NO reforms. The king still keeps the last word on every aspect political, economic and religious.