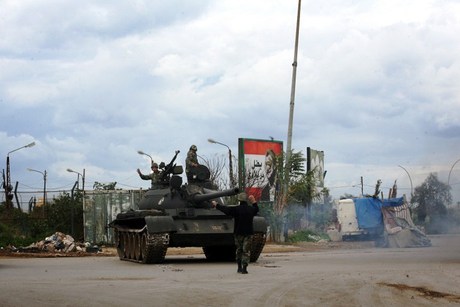 One person was killed and five other people were wounded on Friday afternoon as clashes renewed in central Tripoli between armed Salafists and gunmen loyal to Damascus and Hizbullah.

A security source told Agence France Presse that one person was killed and five others wounded in the old souks area as a house went up in flames after being hit by a shell.

State-run National News Agency said Toufic Shalabi was killed and several other people were wounded in clashes in the gold market, the fish market and the areas of al-Nahhasin, al-Rifaiyeh and Bab al-Hadid.

MTV had reported that “the head of al-Nashar family's gunmen" was wounded in the gunfight.

According to Voice of Lebanon radio (93.3), the army, which had restored a tense calm on Thursday, was "shooting back at the sources of gunfire."

Voice of Lebanon radio (100.5) said machineguns and rocket-propelled grenades (RPGs) were being used in a “fierce manner” in the clashes.

Later on Friday, LBCI television said cautious calm engulfed the conflict zone and that the army deployed in the area after the withdrawal of gunmen.

One person was killed and seven others were hurt in fierce clashes on Thursday between members of al-Nashar family, loyal to Syria and Hizbullah, and armed Salafists from the Hajar family, who back the Syrian revolt.

It was the first battle since 2008 in central Tripoli, although frequent Syria-related violence has raged in other districts.

It comes after some three weeks of sectarian fighting in the flashpoint Jabal Mohsen and Bab al-Tabbaneh neighborhoods, during which around 40 people were killed.

The state-run National News Agency had reported cautious calm on Friday morning in the souk area after the military took control of bases from al-Nashar family.

The clashes came after a security plan by the army managed to relatively contain the violence in the flashpoint districts of mainly Sunni Bab al-Tabbaneh and Jabal Mohsen, whose majority of residents are Alawites.

On the political front, President Michel Suleiman voiced relief over the deployment plan executed by the army in Tripoli and its surroundings.

He stressed the need for all leaders and citizens to “cooperate with the army's measures to preserve the region's security and the safety of its residents.”

Suleiman added that “it's about time everyone realized the importance of sparing our domestic arena the repercussions of the events happening around us, especially after it became evident that the parties' involvement in fighting and clashes, in support of one side or another, will only lead to the death of innocent Lebanese civilians and the destruction of properties, without any impact on the current conflict equations.”

Troops have set up checkpoints in all neighborhoods in Tripoli and deployed heavily in Syria street that separates the flashpoint districts.

Soldiers opened fire on snipers in Bab al-Tabbaneh overnight and carried out raids in most Tripoli neighborhoods to chase the gunmen, NNA said.

The fighting in Tripoli is linked to the war in Syria where a mostly Sunni-led uprising is seeking to topple the regime of President Bashar Assad, who is an Alawite.

Those people are idiots. If they are so devoted to the cause, why don't they fight it off in Syria. I understand the army is in a sensitive spot and undoubtably has no shoot to kill orders. But this zoo must be stopped! Lebanese should remember the role ALL your za3ims are playing in this. Think about it for a second before you attack one another verbally on this site. Those so called leaders are billionaires! How well are you and I doing?

You and I made them.

Josh, aren't tired of tossing grenades at people? Shame on you.

I don't even know how I ended up here, but I thought this post was great. I do not know who you are but definitely you're going to a famous blogger
if you are not already ;) Cheers!