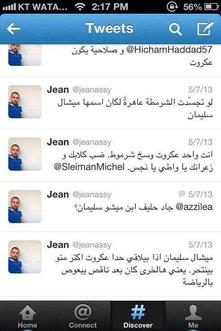 A Lebanese blogger has been questioned by the Internal Security Forces for his insulting tweets and not as reported for criticizing President Michel Suleiman.

A careful examination of Jean Assy's twitter account reveals swearing and name-calling against Suleiman which go beyond society's morals and ethics.

Defamation is a crime according to Lebanon’s penal code.

The image grab of his twitter account published above and which shows his immoral tweets, is aimed at putting an end to the political reactions made by some parties under the excuse of defending freedom of expression.

In reality his tweets are morally degrading and do not fall under the framework of freedoms.

Politicians and not only the judiciary have a duty to preserve the post of the president out of respect for social values.

Assy was on Tuesday briefly seized by the ISF's Office to Combat Cyber Crimes to question him on the series of tweets he has made. No charges were brought against him.

“Some people are attacking me for the "insults" I wrote, while I'm pretty sure they say things even worse about the president and others offline,” he has said in one tweet.

im sorry phil but whether aouni or not, his arrest is unacceptable.

he is far from the only one to have used insults publicly.
if the president is so sensitive, he can use the block option for this guy's account.

the bigger hypocrisy here is when you see armed groups stroll infront of an army checkpoint or patrol unhindered, and someone tweeting gets arrested.

just so you know, the same applies to this forum and if they are able to retrieve the names of the account holders, we would probably all face arrest and questioning.
maybe we should be thankful now the ISF doesnt have the technology to do that, because if they get it, i am very much doubtful naharnet would refuse to provide them with all the info based on user's rights or privacy

anyone, i think it is this over sensitivity that gets the lebanese in trouble. so what if someone swears at you and calls you names?
does that make you any less of the person you are? do you think that if someone here insults me and downvotes me and says all kinds of things, it will affect me or my opinion?

the one who uses this method as opposed to reasoning is the one who loses the argument and it is stupid, but by no means should it be illegal

Who the hell wrote this article?? Naharnet needs to start putting author names (or at least pseudonyms) on these things.
"immoral tweets",
"In reality his tweets are morally degrading and do not fall under the framework of freedoms",
"which go beyond society's morals and ethics"
@Author+Editors: I don't really want to hear your personal take on "morals and ethics" I just want facts (or even at least pretend facts). That's what news sources are for. If this website wants to start dishing out personal opinions in articles I'm ok with that, but at least separate them from the news and make the author's name visible.
TLDR: We read the news for the facts, not for some nameless person's opinion

since when freedom of expression is a licence to insult and curse people ?!?

The President should be respected, period ! because he symbolises the state! cirtisizing is freedom of expression but not insulting !
The problem in Lebanon is that we don't have respect for authorities (president , army, ISF ... ) , this is why we r in a failed state... 7aret kil min 2ido la 2ilo, and this applies to all parties 14 and 8 and others!

this is not freedom of speech this is insulting on the personal level..
so this idiot wanabedeveloper must fry! can he insult hasan nassrallah? can he insult bachar el assad? can he insult al-assir? no he can eat shit and die! el marjaleh 3ala el massihiyeh la ennon democratic in the blood!

hey, if you're holier than thou and dont swear, good for you.

other people swear and want to swear. mature people can choose to ignore it. only children and stupid people that get affected or upset by someone saying a bad word to them. yes you too michel!

When people insult in this way then yes i dont see whats wrong with taking it to trial. If people cant argue their opinion in a civil way, then their opinion no longer matters. I understand that people swear in heated debates, but if someone hasent used such language against you, i dont see a reason to start using such language against him. There is a diffirence between criticizing and basicly defaming someone with such words.

How dare anyone insult our great good-for-nothing corrupt president-by-parachute, may God bless him? Don't they know that he'll jump on the opportunity to prove that he's a man? Just look at how he dealt with the helpless ones who've done it to him more brutally, be that in WikiLeaks (Field Marshal Elias al-Murr or Dr. Arreet 7akeh, our most prominent military strategist who lost every single battle he was involved in except the one in which he joined forces with the Syrian occupation, to name a few) or multiple times in the local media and 3ala 3aynak ya fajer (Kabbara et. al)! Oh, the helpless ones who were punished were not these? Oh, nothing happened to these? Oh, these are his best buddies and their mutual love is out of this world? Oh, the helpless ones were a few youngsters (erfenin 3ishet el z..b wa akl el kh...ra bel balad men rasa la ka3ba) on Twitter and Facebook? He is a man alright!

Freedom of speech? We are fighting for the right to live, let alone the right to express ourselves.
1. this guy's tweets show everything that is wrong in our society.
2. He must be made to apologize to WHOMEVER those insults were directed, president or not.
3. on the other hand, what about those thugs roaming the streets? i.e. annahar pics.
they must be locked up, and those who incite and finance them.
bottom line,
We should all be ashamed of being lebanese, we have proven undeserving to live in
country under the rule of law. we (all of us( deserve what we have got. I think that the only solution for those who do not agree with this garbage is to leave the country permanently.

well said, the guy crossed the line of "freedom of speech", what be more interesting is to hear this guy behind the tweet to raise solid debate or argument or even open letter to the president, to truly understand his background. sure not in a million year he will be able to do that, he was never brought up this way a street idiot for that matter, shame on him and utmost respect to our president 110% support

Ridiculous... They gave free advertisment to a loser who otherwize nobody would have heard of.

The law in lebanon only applies on christians. Chiites scare the army because of HA, Sunnites are typically arrested and quickly released to cater to the sunni street.
As for the christians, since they have way more civil sense than the others, have a line outside their foor of tax collectors, censors, policemen, EDL collectors threatening them whenever they do something wrong. And yes. This is sectarian.

no, this is too much we cannot talk the president this way,,,,,,

Though many will disagree with this guy's sentiment about the President and even though his language is both crude and unwarranted, freedom of speech should guarantee him the right to express his opinion however misguided it is.
There was no incitement to violence in what he said (from what one can see above) therefore leave him be.
Instead, go prosecute those arms toting outlaws that are dragging us into the abyss by involving us in Syria against our wishes.

I still wonder if al Nahar has any journalists in its employ. This statement seems to be a press release from some dysfunctional government agency.

Sorry, there wasn't enough of this on this thread. Didn't feel like naharnet! :)

this is pure Lebanese politics. freedom of expression only works for civilized, non-haters people.

If he would have tweeted in English, nobody would have cared. And that is saying everything about the educational level of our beloved leaders.

Wait till a president on a hezb payroll is in, then you will see an iranian type system where anybody saying something negative is arrested for days