Army Warns Outlaws, Vows to Confront them with All Means 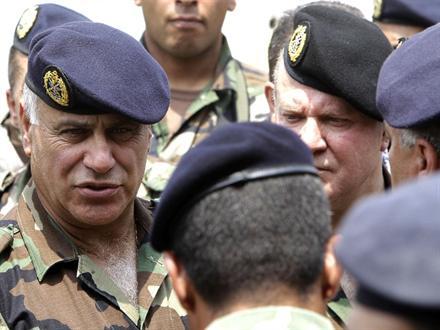 The army said in a communique on Friday that it will not tolerate outlaws and will confront them with all the available means.

“The army command called for self-restraint and not to b driven by rumors,” the statement said.

The communique said that gunmen opened fire at an army checkpoint at dawn in the Masnaa area and Majdel Anjar prompting troops to respond the sources of fire.

It said that the army detained 22 suspects.

The communique also noted that an army patrol also arrested a number of armed men in the southern city of Sidon and seized in their possession military equipment and arms.

Earlier, Army Commander General Jean Qahwaji said in comments published in As Safir newspaper that the military will not tolerate any security violations, stressing that it will confront any attempts to destabilize the country.

The army “will not tolerate attempts to undermine the security and stability of the Lebanese,” Qahwaji said.

He described the current situation as “delicate” and “difficult,” saying: “The current stage demands the Lebanese to be aware of the dangers awaiting them and their repercussions, which imposes on to cooperate to end the tension.”

Qahwaji stressed that the army will “fully carry out its duties to take the country to safety.”

Since the eruption of Syria's clashes in 2011, Lebanon has been witnessing several security incidents in the northern city of Tripoli, the southern port city of Sidon, along the Lebanese-Syrian border and in several other regions.

Security sources told As Safir that the army has been put on “alert” to end sedition.

Multi-confessional Lebanon, which fought a bitter civil war from 1975-1990, is deeply divided over the conflict in neighboring Syria, which is complicating its political life.

The March 14 opposition widely supports the Sunni-led uprising against President Bashar Assad, while the Hizbullah and its allies is actively aiding his forces inside Syria. At the same time, some Sunni fighters have gone to help the rebels.

Unless the perpetrators are Hezbollah, in such case we will do nothing

HA tilted the balance in Syria. Imagine what they can do in Lebanon. So I have to agree with you.

Of course the thugs of HA don't act like thugs, specially if you are a chia like jc of iran and mowaten of persia. When the mujaheedine of HA brutally beat up peaceful demonstrators and shoot one of the in the stomach twice in front of the filthy iranian embassy that is called resistance not thuggery. Chia's logic is distorted for sure.

bala habal Mowaten...HA was very civilized around the Iranian embassy right? grow up. Both sides are crap and are destroying this country. Stop lying to yourself!

and hizbo said yesterday to the rai that its army is now bigger than the Lebanese army (men and gun) leave it like this one more year and Nasralo will proclaim Lebanon Fakih style this is Iran and Hizbo real aim is to take over lebanon...and let abou el le7a rule on us with their filth and scum!!

Mowaten:
you are full of BS.
hizbushaitan kept their cool? and what about the mortars they used?
when the army will stop hizbushaitan, then we will believe we have an army, otherwise, they are acting as the defenders of hizbushaitn, and they should be scrapped.
no one can forget how hizbushaitan thugs killed that demonstrator in front of the eyes of the army and how they did not allow medics to tend to him for over half an hour.
an army that acts this way is just a sold out army and a tool in the hands of thugs.

are you for real?
the videos are all around for you to see!
if you want to be blind, we are not :)
stop trying to mislead and misinform.
you know I laud assir, but hizbushaitan acts are provocations. so they should be treated as such.

amazing mowaten: we all saw those reports on tv stations and you pretend you have not seen them?
pathetic indeed. :)

moreover, the thugs that the army should be dealing with are those who killed the demonstrator in front of them.

Unless you belong to M8...then We see nothing
We know nothing and we will do nothing

iron fist? yesterday on aljadeed we saw the army passing in front of armed and masked men just looking at them and doing nothing.... LOL maybe they were hezbis that is why....

Good that the army is stepping up. Hezbollah cannot defend the region from Tak Tak Head Cutters and babysit Lebanon as well .. or perhaps there are those who would welcome the head cutter?

Basically he's addressing thugs like Assir and the imported FSA-AL Qaeda mercenary terrorists who do the bidding of the kingdom of terrorism. Find them, arrest them, hang them.