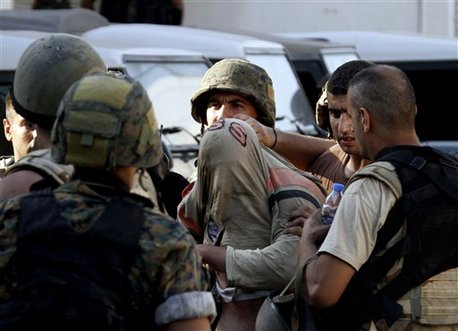 The United States has expressed grave concern over the latest battles that pitted fighters supporting Salafist cleric Sheikh Ahmed al-Asir against Lebanese soldiers in the southern city of Sidon.

“We condemn in the strongest terms the attacks by militants against the Lebanese Armed Forces (LAF), which have resulted in the deaths of a number of soldiers and civilians,” he said.

“This is the time for the international community to stand with Lebanon and responsible Lebanese leaders in defense of the interests of the Lebanese people for a stable and sovereign country,” Ventrell said.

He also praised the efforts of the army and police in working with political leaders to maintain stability, and renewed commitment to continue providing training and equipment to assist security forces in their role of preserving unity.

At least 17 soldiers were killed and 50 were wounded in two days of clashes with Asir's armed followers in Sidon, which on Monday was turned into a battle zone.

More than 20 of Asir's supporters were killed, according to a security official.

Dozens of them were also arrested. But there was no sign of the cleric.

reinforce the FSA and finish off the giraff, then we'll be better off in lebanon.

yeah, if we can't deal with them locally because of their unmatched armament, we can hope that the FSA [without Nosra that will melt down like Asir did] will eventually manage to get rid of the giraff that caused so much misery to Lebanon.

I was thinking how we could reach out to Iranian people, and show them wat their money and resources are doing to innocent people in Syria and Lebanon. Their new president incarnates hope... but we shouldn't expect too much from him or else we'll be disappointed.

The best thing that can happen now is to strengthen the enemy of our enemy: FSA!

You mean the same FSA-Al Qaeda that is now protecting Assir after him and his terrorist thugs killed more than a dozen of our noble Lebanese soldiers? That FSA?

Naharnet: could you please ban this person's IP address? muchas gracias. he keeps returning with dashes with his other alias 'wolf'.

I love how the army bagged this terrorist! like wild animals...