Police Use Tear Gas to Disperse 2,000 Protesters in Ankara 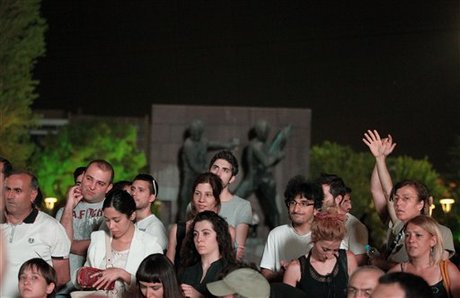 Protesters had gathered overnight in the Dikmen district of the capital and attempted to erect barricades to block traffic on a main artery.

Local television pictures showed demonstrators chanting against the release of a police officer who stands accused of fatally wounding a 26-year-old protester during the country's recent unrest.

Protests initially sparked by a brutal police action against a local conservation battle to save Istanbul's Gezi Park snowballed into nationwide demonstrations against the Islamic-rooted government, leaving four dead and nearly 8,000 injured.

Prime Minister Recep Tayyip Erdogan's government has been widely criticized for its handling of the crisis, with the United States and other Western allies condemning the use of excessive police force against protesters.

On Monday, Erdogan praised the police for their "heroism" in dealing with the protesters.

God bless the Turkish revolution and freedom fighters! Down with the tyranny and terrorism of Erdogan!

May be Erdogan should follow the footsteps of his forefathers, the Ottomans. That would be an awful thing, now wouldn't it? Would the U.S. and Britten open their eyes then?