Berri Calls Parliament to Session in First Week of July 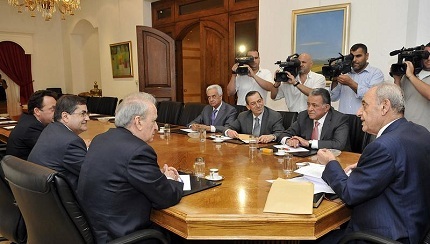 Speaker Nabih Berri called parliament to session for the first week of July.

The session will convene on July 1, 2, and 3, revealed deputy Speaker Farid Makari after a meeting for parliament's bureau at the speaker's Ain el-Tineh residence.

Al-Jadeed television said that the new wage scale draft law will be among the issues addressed during the parliament sessions.

Earlier on Wednesday, lawmakers said after their weekly meeting with Berri that he is leaning towards modifying the structure of the parliamentary electoral subcommittee tasked with reaching an agreement over a new electoral law, reported the National News Agency Wednesday.

They quoted him as saying that the modified subcommittee will include MPs and ministers, said LBCI television.

Berri revealed last week that he would called for the subcommittee to resume its meetings to agree on a new electoral law and find an alternative to the 1960 law within a certain timeframe.

The subcommittee's failure to agree on an electoral law was the main reason that led to the extension of parliament's four-year mandate.

The lawmakers extended their term for 17 months, pushing the legislative elections to November 2014.

Gebran Bassil must be unhappy. How come he only gets to be a minister while 3adilo General Chamel Roukoz is being pushed to become Army Commander / President? Wlek shame on you ya General. In all of Lebanon, only your sons in law are qualified for high posts?

Anti-Change and Anti-Reform describes it.