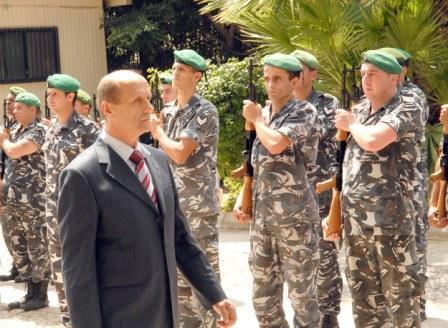 Caretaker Interior Minister Marwan Charbel on Wednesday “categorically” denied that he had tried to mediate with the Army Command on behalf of Sheikh Ahmed al-Asir over a ceasefire during the Sidon clashes.

“The statement of the ministerial-security meeting held under President Michel Suleiman at the Baabda Palace called for continuing the battle whatever the sacrifices,” Charbel said in a communique.

“The interior minister cannot have a unilateral stance and seek to negotiate with the gunmen who targeted the Lebanese army, the big brother of the other security institutions which represent the backbone of the Lebanese state,” he added.

He noted that he was “totally convinced of the need to put an end to that phenomenon that threatened to assassinate the country through targeting the military institution,” adding that no one can question “the keenness of the participants in the Baabda meeting on the Lebanese army and the blood of its martyrs.”

The army on Monday managed to overrun Asir's security zone in the Sidon suburb of Abra following fierce clashes that left 17 troops and more than 40 wounded.

At least 20 gunmen loyal to the Islamist cleric were also killed in the battle.

Well we all know March 14 are a bunch of filthy liars, so why should we all believe their outlandish accusations? The truth is that they are butt-hurt that their loser of a sheikh was rightfully put a stop to.