Morsi Warns Egypt could be 'Paralyzed' as Clashes Rage 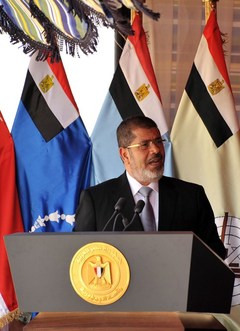 Islamist President Mohamed Morsi warned on Wednesday that political divisions in Egypt "threaten to paralyze" the country, as at least one person was killed and scores were hurt in clashes between his supporters and opponents.

In a televised speech to mark his turbulent first year in power, "Egypt faces many challenges. The polarization has reached a stage that could threaten our democratic experience and paralyze the nation."

Just hours before he spoke, Islamists had been holding a rally in his support in the Nile Delta city of Mansura when opponents began throwing rubbish at them and fighting erupted, a security official said.

In addition to the one person killed, another 237 were hurt, the health ministry said.

Two of the injured were taken to the intensive care unit of Mansura International Hospital with live bullet wounds, medics there said.

The clashes come amid widespread tension ahead of planned anti-Morsi rallies on Sunday, at which the opposition will again demand that he step down and that early elections be called.

Organizers of a campaign dubbed Tamarod (rebellion in Arabic) say they have collected more than 15 million signatures in support of a snap presidential election.

And with Islamist parties having called for their own rallies to support the president on Friday, there are fears of more unrest.

Gatherings for and against the president were being held around the country on Wednesday, but confrontations only erupted in Mansura, a security official said.

In Cairo's Tahrir Square, the epicenter of the 2011 revolt that toppled president Hosni Mubarak, hundreds of anti-Morsi protesters gathered to watch the president's speech.

Some have announced they will begin a sit-in there.

Others gathered outside the defense ministry, waving Egyptian flags and chanting against the president.

In Alexandria and several Nile Delta provinces, Islamist groups have held rallies in support of him.

Morsi promised reforms and called for dialogue in a bid to placate protesters ahead of Sunday's rallies.

He insisted he was working for the goals of the revolution that toppled Hosni Mubarak in 2011, which he is accused of failing.

"For the revolution to reach its goals, there must be reforms at the root," he said.

Morsi repeated his call for dialogue with the opposition, amid deep tension and anxiety ahead of the Sunday protests to call on him to step down.

"We Egyptians are able to overcome this phase and overcome the challenges... All I ask of you now is to sit and discuss... to look for the positives and build on them; and to fix the negatives."

The president admitted to making mistakes and vowed to correct them.

"I have made many mistakes, there is no question. Mistakes can happen, but they need to be corrected," he told a packed auditorium.

Morsi's supporters say he is an elected president who is working to root out decades of corruption in state institutions. Any attempt to remove him from office would be a coup against democracy, they say.

His opponents accuse him of concentrating power in the hands of the Muslim Brotherhood from which he hails and of failing the aspirations for freedom and social justice that inspired the revolution against Mubarak.

Egypt's powerful army, which has been on the sidelines of politics since Morsi's election, warned it would intervene if violence breaks out in the country.

The military has brought in reinforcements of troops and vehicles in key cities in order to protect vital establishments in case of potential unrest, security officials said.

Morsi the بهلول didn't understand yet than his armies would be much more useful and legit fighting alongside FSA than his own country.

I think the political majority should understand that just being a majority does not entitle them to step on the rights of the minority. People are no longer sheep that are brainwashed, the internet enables them to hear and read about different points of view.

Mr. Morsi get yourself and the country a real identity one without religious prelude. Assuming that, truly, the majority elected you, you still have job to do for the entire country.

i wonder how this marsi got his phd ?

islam will prevail .let it be a thorn in all your eyes.