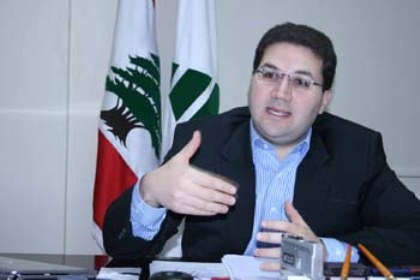 Phalange MP Nadim Gemayel's convoy was attacked with sticks, stones and tomatoes on Friday by angry protesters opposed to the extension of the parliament's term, the MP told Future television in a telephone call.

“While passing through the neighborhood of Ashrafiyeh, a crowd of angry people groundlessly attacked my convoy with sticks, stones and tomatoes,” he said, estimating the crowd to be civil society activists returning from the sit-in staged in Downtown Beirut protesting the extension of the parliament's term and demanding elections to be held.

Gemayel believed that the crowd attacked his car out of anger when they saw that it carried a parliament license plate, bringing down any notion that he could be targeted personally.

“All the convoy's cars were smashed,” he added and “one of my companions of the Internal Security Forces was injured in the head”.

They however managed to push back the attackers and soon the ISF intervened and cordoned them off.

For his part Phalange Party leader Amin Gemayel denounced on Saturday the “unfortunate incident, which indicates a prevailing chaos in the country,” he said stressing the need to take the necessary measures.

A Civil Campaign for Electoral Reform staged a sit-in at Beirut's Riad al-Solh Square as the parliament voted in the end of May to extend its own mandate for 17 months after the rival political parties failed to reach an agreement over a new electoral law.

Thank God they did not make of Potato Nadim French fries.

Naharnet it is not real journalisim to write one side of the story especially when the other side is so easily avcessable:https://www.facebook.com/nasawiya/posts/10151726175730734
There are at least 30 witnesses on what happened last night and this is what you decide to write.

This is an utter lie. It was his bodyguards who barged into the Nassawiya party and threatened them with machine guns. It is disgusting of Naharnet to publish a false story like that without verifying it first. http://ginosblog.com/2013/06/29/what-really-happened-with-nadim-gemayel-last-night/

Wow there's only one side to this story? An MP makes an outlandish claim which contradicts every video and picture published online and you print as fact? In journalism, you have to make phone calls to do something called "reporting" which means trying to find out what actually happened when people make big claims. This is not journalism, this is letting a member of Parliament say whatever he wants – which is actually propaganda.

Those MPs voted to employ themselves for another 17 months. Do they seriously expect people with self-respect to take it laying down? There are plenty of sheep and illiterates in Lebanon. But there are still intelligent free thinkers who choose to take a stand. When we see democracy and freedom being hijacked by the same clique of politicians who are responsible for this sorry state of affairs, it is our duty to act.

I know, I know brother. Makes my stomach turn.

It's shameful that Lebanese journalism only reports one side of the story especially that the other side is easily accessible:
http://ginosblog.com/2013/06/29/what-really-happened-with-nadim-gemayel-last-night/
This this is not from nasawiya's page and there are dozens of nonpartisan witnesses to what happened last night!
We all know that our politicians are corrupt but it's very depressing that our media doesn't even try to have a free voice!

FT, a very distasteful comment about an orphane, your hate seems to have no bounds, I bet your a former SSNP turned Aouni.
I wonder if they would have had the courage to attack a HA MP.

Phoenix, please state which policies of the march 14 camp which you desdines and want Nadim to distance himself from, what wrongful acts is Nadim committing? with all due respects.

People have the right to be angry about the rotten political, social and security situation in the country. I think that it is healthy for people to be angry at the usurpation of power that lebanese politicians now routinely engage in without giving a second thought about their constituents,their needs,safety or the country's laws. Most democracies in the world continue to exercise the right to vote even in time of wars or crisis unless under a foreign occupation. Perhaps that is our problem, we have placed ourselves under the influence of regional powers and forgotten about our own nation and its people needs. I hope that the lebanese people will rise up and retake their rights and country back from these crooks.

Aouni thugs emboldened by the backing of HA now attacking Christian MPs, I dred the day that retaliation occurs and these tugs embroil the Christian areas into a state of violence, which HA will of course intervene to subjecate the rest of the country under the pretext of aiding their allies.

God Bless You Nadim, and for those who are making stupid noise, no we are not going wait to uncover who is the real evil to kill more anti-syrian politicians after the fact when someone is assassinated or simply because Bachir drove his own car then we have to play heroes. Look at Botros Harb attempt, they even identified the individuals and HA will not deliver the person no you can approach their security square zone...so we will do whatever it takes to maintain our freedom of speech voice against the Assad regime and his dogs in Lebanon.

LIES LIES LIES, the protesters in downtown were peaceful and in fact it was the chabi7a bodyguards of gemayel that attacked the young people in nasawiya. check reliable sources such as "take back parliament" or "the alternative student movement" to know the real version of the story. shame on you for twisting the facts.