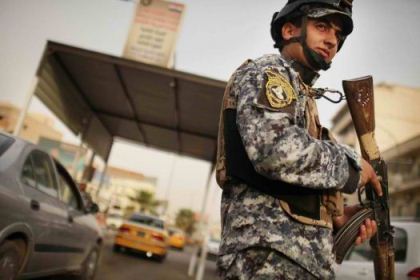 Attacks in Sunni Arab towns surrounding Baghdad killed six people on Saturday, the latest in spiraling violence that has left more than 420 dead this month and sparked fears of renewed sectarian war.

The surge in unrest comes as Iraq grapples with a prolonged political deadlock and months of protests by the Sunni Arab community alleging discrimination at the hands of the Shiite-led authorities.

Analysts warn that the political standoff may persist until general elections due next year.

In Abu Ghraib, just west of Baghdad, a bomb in a market killed three people and wounded at least 10 others.

In nearby Garma, gunmen opened fire on a group of policemen and killed three of them before fleeing, security and medical officials said.

Another bombing at a vehicle repair garage in Taji, north of the capital, wounded at least five people.

Three anti-Al-Qaida militiamen were also wounded by a blast in Sharqat, north of Baghdad, a day after a series of attacks targeting the militia fighters killed at least eight of them.

The Sahwa are a collection of Sunni tribal militias who turned against Al-Qaida and joined forces with the U.S. military from late-2006 onwards, helping to turn the tide of Iraq's bloody insurgency.

They are often targeted by Al-Qaida-linked militants who regard them as traitors.

The latest attacks pushed the overall nationwide death toll for June to 424, the third successive month the figure has topped 400, according to an AFP tally based on reports from security and medical officials. April and May saw more than 1,000 people killed in all.

Iraq has seen a rise in violence since the beginning of the year, coinciding with rallies among the Sunni Arab minority against what demonstrators see as discrimination and wrongful targeting at the hands of the authorities.

Analysts say a government failure to address protesters' grievances has given militant groups recruitment fodder and room to maneuver.