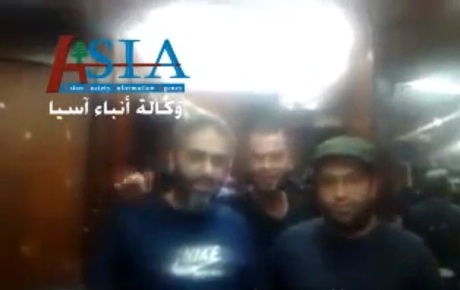 Unrest erupted Monday afternoon in the northern city of Tripoli as a man was arrested for interrogation after he appeared alongside singer-turned-Islamist militant Fadel Shaker in a video circulated in the wake of the Abra battle.

“A hand grenade was hurled near Tripoli's Serail as gunmen appeared on the city's streets and blocked roads in al-Nour Square and al-Beddawi,” MTV reported.

LBCI television said gunmen were roaming the city's streets on motorcycles while firing their guns in the air.

A percussion bomb was hurled at al-Nour Square as businesses closed in the area, state-run National News Agency reported.

"Clashes erupted between the army and gunmen at al-Salam roundabout in Tripoli," LBCI said.

Later on Monday, Voice of Lebanon radio (93.3) said "more gunmen" arrived at al-Nour Square and "some of them tried to provoke security forces by firing an RPG over the serail."

Al-Jadeed said gunfire was heard in the vicinity of the Rashid Karami International Fair Complex.

"An army post tasked with preserving security near the Syrian Social National Party's office in Tripoli has come under gunfire and the army sent reinforcements to the area," Voice of Lebanon said.

Army units started deploying across the city later on Monday in a bid to contain the unrest.

"The Lebanese army has deployed along the road linking Nini Hospital to the Abdul Hamid Karami Square," al-Jadeed said.

Voice of Lebanon said the army "stormed al-Nour Square and fired a flare bomb in the location, which prompted protesters to leave the square after army troops and vehicles deployed in it."

"The army has seized full control of the al-Behsas, al-Jemmayzet and al-Nour Square areas and the commando and airborne regiments have arrived on the scene to settle things decisively," military sources told LBCI.

"The army reopened roads in al-Behsas and the Abdul Hamid Karami roundabout and gunmen have retreated to the city's internal alleyways," state-run National News Agency reported.

Earlier on Monday, LBCI said “a threat has been issued that all roads in Tripoli would be blocked in case the army did not release Ghali Haddara, who was arrested by intelligence agents in Tabarja after appearing in a recent video with Fadel Shaker.”

For its part, Voice of Lebanon radio (93.3) said gunfire erupted at Souk al-Qameh in protest at the arrest of Ghali Haddara in al-Qobbeh.

Shaker is now on the run with fellow fugitive cleric Sheikh Ahmed al-Asir.

The pair are now being sought in a nationwide manhunt after clashes between Asir and his Salafist supporters and the military in the southern city of Sidon that left 18 soldiers and at least 20 gunmen dead.

I agree with you.. But the same four Hizbullah members who are implicated n hariri's murder and other related crimes and the other Hizbullah member who is implicated in Harb's failed murder attempt should also be arrested and let the court decide their innocence if they are truly innocent... Where are they? Why are they on the run? Why Hizbullah is refusing to hand them over... And please do not tell me the International court is a Zionist entity.. This is Nasrallah's fabrication and people are not that stupid.

@ mowaten
UN is more impartial than "your" people or any other entity in Lebanon. Anyone with half a brain knows that.

I support the army and the way they handled the situation in Saida. The incident there put in place a principle that will not be easy to circumvent namely from here on in any group that wields arms against the army or threatens state institutions with arms should be dealt with in an analogous manner.
The above not withstanding, the legitimate Sunni feelings of being targeted and treated as second class citizens should not be underestimated. That does not mean that the army should be prohibited from going after someone like this Ghali Haddara especially since his appearance in a tape alongside a person who confessed to killing army personnel makes him a valid arrest target. However, as @Roaring-FlameThrower correctly points out for Lebanon to be a legitimate state it must respect and abide by the rules and due process. Until convicted this man is presumed innocent and deserves all legal rights due him.

@ the_roar
Where do you see me accusing anyone or anything in my above post? Come on buddy don't be too quick to jump the gun.

@ the_roar
Re-read the posts again. I accused no one of anything. What I did is simply state that a self respecting state should avail itself of due process. No more, no less.

what applies to any person should apply to all.
I would add: why is samaha still not tried? he was caught with his hands in the bag, and still hizbushaitan are delaying his trial!
the rule of law should apply to all or to none.
this is why we are calling for the state.

@mowaten
You should not be one to speak in the manner you did. After all "your" people were not much more civilised when they raped Beirut on May 7th 2008 now were they?

LOL, that touched a nerve did it? Well, it is no different than your people insistence on using the word cannibals.. What's good for the goose my friend, is good for the gander.

dream on... this is not what happens in Lebanon.

What happened was that the Lebanese government made a decision that an outlaw hizb with amassed arms and a "private" communication network took exception to. Don't make it sound like HA's action were legit, they were not and you know it.

emperor; maybe in your civilized ethiopia, army intelligence would appoint an attorney for you, unfortunately in Lebanon the first thing they do to you is break your face!

He should be put in the same cell as the killer of the pilot Samer Hanna and the suspect in assassinating MP Harb. His only crime is that he appeared in a Video with a wanted man (guilt by association). He should be afforded due process, jailed if convicted and released if innocent.

To be honest, he was indeed making threats of destabilizing the country and saying they will overrun Tripoli with their madness etc.

Arresting him for questioning isn't a bad idea wouldn't you think ?

endless, I agree with you 100% (hopefully my post above does not imply otherwise). I was only hinting that the same should be done to Hezby thugs who committed crimes against the army, Politicians, and civilians.

Agreed, though the more pressing matter given the circumstances is to focus on these particularities and set an example.

This is disgusting. We are focusing our energy on trivialities while the syrian refugees are invading us. Soon they will start liking it here. All countries around syria closed their borders to syria this week and said enough refugees while lebanon is still open like a whore. We should make a sit in to protest against opening of our borders for every body.

Called me faint-hearted, but I have a problem with your pragmatic solution. I don't see how unarmed people fleeing death and destruction should be hunted down and shot by Lebanese villagers. I know, FT , that you are making such wild statement out of frustration and undeniable patriotism, but your suggestion is not the answer.

The answer is for this country to speak with one voice so that the world listens:

1. Lebanon did not create the Syrian crisis and should not bare the financial and social brunt of it.
2. The world community has a duty to help us with this human catastrophe.
3. We need money to organize the refugees in camps that provide the basic humanitarian necessities.
4. We need a strong functioning state with the ability to repatriate the refugees once immediate danger is over.

@mowaten of iran: are you the emperor's lawyer?

Good Job Army, you are making me proud.
Don't stop until all criminals are put away for life.
The Lebanese people deserve better life than this.
RIP to LAF who lost their lives last week in Abra.

I would just like to say something and ask a question. Anyone with an honest answer, plz reply.

Forget the harriri killing, the STL, even may 7... I just have a question about one thing... The attempted killing of Harb.

There is a clear suspect in that case. Can the intelligence services go to da7yi and arrest this suspect for questioning? And why or why not?

lebpatriot, I can not speak for M-14, only for myself .... I am glad he got arrested and he deserved to be arrested. So I am not throwing a fit, but my fear is if a Hezby is arrested then you (and others who think like you) may throw hand grades and not just fits.
Assure me that this would not be so, I will believe you.

These salafis/wahabis are like a cancer, let them go for as long as Lebanon has and they will spread and cause and take over. They should be eradicated from their root.