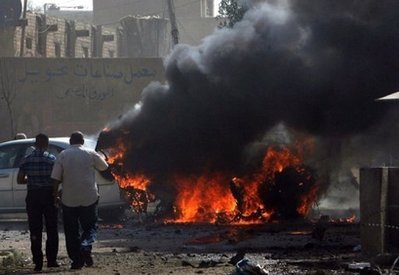 The attacks were the latest in spiraling violence that has coupled with a prolonged political deadlock and months of anti-government protests to spark concern Iraq could see a revival of brutal sectarian war.

In Muqdadiyah, northeast of Baghdad, a suicide bomber set off his explosives-rigged vest in the middle of a funeral for a Shiite man, a police colonel said.

The 10:00 pm (1900 GMT) attack killed at least five people and wounded 15, the officer and a doctor at the local hospital said.

Meanwhile, in the nearby provincial capital Baquba, a bomb went off at a cafe in a predominantly Shiite neighborhood, killing three people and wounding 12.

Iraq has seen a surge of violence in recent months, with 2,500 people having died since the beginning of April, according to the U.N.

The bloodshed has coincided with protests among Iraq's Sunni Arab minority against alleged discrimination at the hands of the Shiite-led authorities.

Analysts say a failure by the government to address the underlying causes of the demonstrations has given militant groups recruitment fodder and room to manoeuvre.