March 14: Whole of Lebanon Was Targeted in Sidon Clashes 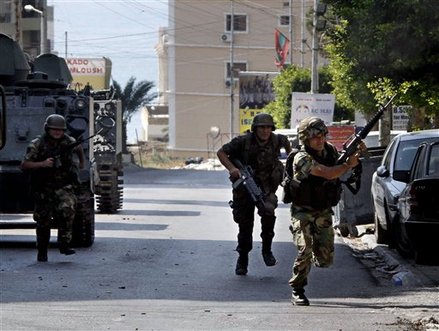 The March 14 General Secretariat condemned on Wednesday the recent clashes in the southern city of Sidon, refuting accusations that the alliance was supporting Salafist movements in Lebanon.

It said in a statement after its weekly meeting: “We stand against such groups … Sidon has been an example of Muslim-Christian coexistence.”

On claims that the Sunni sect was being targeted in the unrest, it said: “The whole of Lebanon and its population were the victims.”

“We deserve a productive state and army,” added the March 14 General Secretariat.

Commenting on the political deadlock in Lebanon, the general secretariat voiced its confidence that Prime Minister-designate Tammam Salam would be able to succeed in forming a new government.

President Michel Suleiman and Salam enjoy the complete support of the Lebanese people in their mission, it stressed.

It blamed Hizbullah's involvement in the Syrian crisis for obstructing the government formation efforts, as well as its “placing of preconditions that are rejected by the Lebanese people.”

The Hizbullah-led March 8 camp has been demanding that it be granted veto power in a new cabinet.

Salam has repeatedly rejected this suggestion, saying that such a power renders a government ineffective.

The UN should move in and disarm the terroristas.

“We deserve a productive state and army".

Thats why you cheer when your Wahabist terrorist allies attack it and murders its noble soldiers in cold blood?

when other then in your stupid brain? tell us? give us a source? or shut up.....

is this enough said?

lovely how FT loves to twist facts to make it fit his stupid FPM propaganda that only empty brains like him will buy... pityful FT... dire need of a therapist....

With every atchoum, March 14 has to say bless you, without which nothing will... well... umm... duh... change? To March 14 applies the saying: I speak therefore I am. blah blah blah blah blah to no avail. art 7akeh bi art 7akeh