U.N.: More than 70 Killed in Warlords' Battle for Somali Port 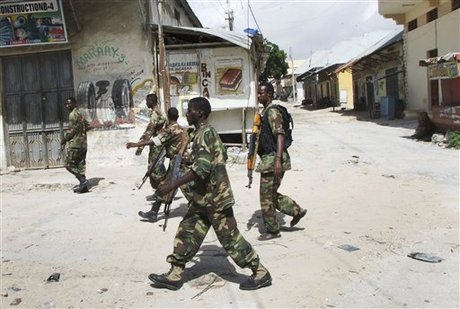 "Recent fierce fighting... continues to have a profound impact on civilians and humanitarian aid work in the Lower Juba region," the U.N.'s World Health Organization (WHO) said, adding the clashes also left more than 300 injured in June.

"Injuries and deaths outside the hospital are estimated to be much higher but cannot be confirmed," the WHO added, which supports hospitals treating the war-wounded in Kismayo.

Clashes have put on hold a vital mass polio vaccination campaign, after the first cases were confirmed six years after Somalia was declared free of the crippling virus.

"Kismayo remains a volatile area, with observed increase in fighting among warring factions, and other incidences of violence such as landmines and hand grenade attacks," the WHO added.

Several rival factions are battling for control of Kismayo, a strategic and economic hub in the southern Jubaland region. They include former Islamist chief Ahmed Madobe, who in May appointed himself "president" of Jubaland, and Bare Hirale, a former Somali defense minister who also leads a powerful militia.

Somalia's government has demanded that Kenyan troops stationed in Kismayo as part of an African Union force be replaced, accusing them of backing Madobe's Ras Kamboni militia, which opposes Mogadishu's rule.

Kenyan troops, which invaded Somalia in 2011, fought alongside Madobe's troops to oust al-Qaida-linked Shebab fighters from Kismayo, before joining the 17,700-strong AU force.

The AU force is mandated -- and funded by the U.N. and European Union -- to support central government.