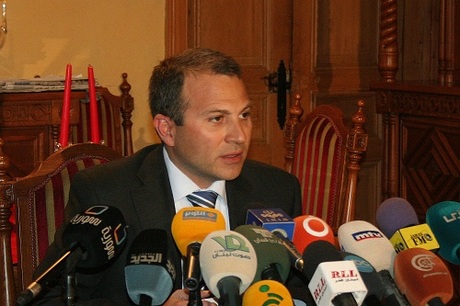 Caretaker Energy Minister Jebran Bassil issued a warning on Friday that the army and the resistance have the ability to protect Lebanon's oil reserves from Israel after he accused it of digging a well 4 kilometers from Lebanese offshore reserves.

During a press conference he held at the ministry, Bassil said: “Israel now has the ability to reach Lebanon's oil reserves.”

But “the army and the resistance have the capability to protect them,” he said. “We won't allow it to encroach on our natural resources.”

Holding such a session is “politically and constitutionally possible,” he said, adding he would coordinate with Suleiman, Speaker Nabih Berri and Miqati in that regards.

If adopted by the government, the decrees require the approval of the parliament.

Lebanon and Israel are bickering over a zone that consists of about 854 square kilometers and suspected energy reserves there could generate billions of dollars.

Beirut argues that a maritime map it submitted to the U.N. is in line with an armistice accord drawn up in 1949, an agreement which is not contested by Israel.

In March 2010, the U.S. Geological Survey estimated a mean of 1.7 billion barrels of recoverable oil and a mean of 34.5 trillion cubic meters of recoverable gas in the Levant Basin in the eastern Mediterranean, which includes the territorial waters of Lebanon, Israel, Syria and Cyprus.

The formation of the Petroleum Authority in November was the first major step in future oil exploration since parliament passed a law in 2011 setting the country's maritime boundary and Exclusive Economic Zone.

The country will witness the first oil exploration process in 2015 and it will take a year to enter the production stage.

soon bassilo ull be out of work when your idiot uncle get concluded with hizbelmazbala you 2 will return to your sizes....pathetic..take advantage now before its too late

While Israel is already exploring, Lebanon is still debating who will get the quotas and commissions. Tfeh!

It is bloody rhetoric of the age period of Ahmad Al Shoukairy of Palestine who wanted the throw the Jewish people into the sea.
The Jewish people are still there and the Palestinians still camping....all based on these empty rhetoric.
Stop bickering and start digging for oil

Thank you for deleting my post AGAIN naharnet you are so for freedom of speech,
Partition please.

Fact is, here we have an Energy Minister proudly stating that the LAF along with the resistance are capable of protecting Lebanon’s oil reserves. Even more proof that the Lebanese resistance is, and will always be utilized to face the zionist threat that Lebanon faces and to assist in protecting Lebanon’s sovereignty. God bless our LAF and our resistance. Yallah, let’s hear from M14 supporters slagging the resistance and their arms. Maybe we should rely on your supported armed groups such as al-assir and thugs!!

Akeed God bless our LAF, and unless the resistance sees the light and agrees to disarm in concert with disarming the Palestinians then a day will come when it gets defeated and sent packing back to its protege Iran. HA's blind loyalty to Iran poses the greatest threat to our LAF.

Who is the resistance if its not the army???
Partition please.

UN1559? forgot it iran lackey? no need of a private resistance when this militia can integrate the NATIONAL ARMY! oh! yes you d lose all your petty privileges and money.... poor minister....

"And maybe reach an agreement with Israel so that maritime border will be defined mutually, sparing everybody from useless confrontation while guaranteeing Lebanese economy a boost it really needs."
I wrote virtually the same words in reply to a previous article on this matter and was laughed down. It seems strange to see a government willing to cause their country untold financial damage, just because they are not willing to sit down with their supposed enemy.
If the Lebanese and Israelis were working the gas platforms side by side, noone would dare try to attack them, and the financial benefit gained by both sides would be enormous.

but how would hezbis sell their soup if peace was made with israel? LOL!

ImBassil, Lebanon's Oil reserves will need to be protected from you and the rest of the thieving politicians, especially from your Daddy-in-law the Lunatic Aoun.

What Resistance, HA ensure that peace and calm prevail on Israel's Northern border. Israel has experienced undeterred tranquility ever since HA's divine victory. The Lebanese in contrast are living in turmoil and political turbulence, no government, no security, and living under the wims and ideology of an armed militia which are steering the country into an economic catastrophe and a civil war.
Is this the resistance Bassil is threatening Israel with.