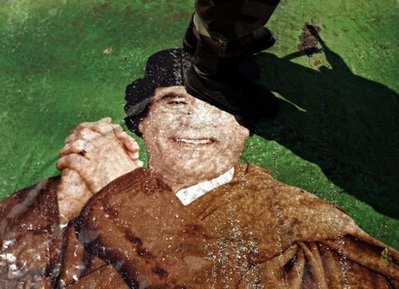 U.S. intelligence shows that the Libyan strongman "doesn't feel safe anymore" in the capital where he has ruled for over four decades, the Journal quoted a senior U.S. national security official as saying.

However, officials told the Journal they did not see the move as imminent and did not believe Gadhafi would leave the country, a key demand of Libyan rebels who have been battling his forces in a weeks-old stalemate.

Gadhafi is believed to have numerous safe houses and other facilities both within the capital and outside of it to which he might relocate.

The news comes as U.S. President Barack Obama faces rising criticism from fellow Democrats and rival Republicans in Congress over his refusal to seek congressional authorization for the three-month-old military operation.

The Obama administration has said approval under the 1973 War Powers Resolution is not required because U.S. participation in the NATO-led air war does not rise to the level of "hostilities," a logic rejected by critics.

A senior U.S. commander meanwhile said that the North Atlantic Treaty Organization (NATO) and Libya's African allies had not adequately planned for the aftermath of Gadhafi's possible fall.

"We, the international community, could be in post-conflict Libya tomorrow and there isn't a plan, there is not a good plan," the senior U.S. commander in Africa, General Carter Ham, told the Journal.

He predicted that Gadhafi could fall quickly, and said there may be a need for substantial ground forces in the country to preserve order.

The United States was widely criticized for failing to adequately prepare for a post-Saddam Hussein Iraq after the 2003 invasion to topple him, which unleashed a virulent insurgency and years of sectarian bloodletting.

The United States, Britain and France launched an air and missile assault on Gadhafi's forces in mid-March in a U.N.-backed intervention aimed at protecting pro-democracy protesters demanding his overthrow.