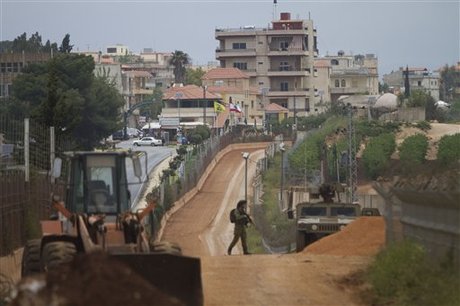 Caretaker Foreign Minister Adnan Mansour called on Friday for filing a complaint with the United Nations Security Council over Israel's violations of the border and its kidnapping of Lebanese nationals.

The complaint comes after a 15-member Israeli commando forces crossed on Monday the border of the occupied Shebaa Farms in the South, and abducted Lebanese shepherd Youssef Hussein Rhayyel.

Rhayyel was kidnapped after the force advanced 600-800 meters into Lebanon, north of the al-Marsad military post.

In the evening, LBCI and al-Manar TV networks reported that Rhayyel was freed.

"Mansour tasked Lebanon's ambassador to the U.N. Nawaf Salam with filing the complaint with the Security Council,” the state-run National News Agency reported.

Mansour explained: “The kidnapping is another Israeli assault on Lebanon that include violating the border, Lebanese waters and airspace.”

"Such incidents are also a violation of the U.N. Security Council Resolution 1701 and of Lebanon's sovereignty.”

Last week, the Israeli army kidnapped two shepherds from a region near the southern town of Shebaa. They were released one day later following a mediation by the United Nations Interim Force in Lebanon.

Kidnapping incidents of Lebanese residents by the Israeli forces are frequent.

On November 1, 2012, Israeli authorities handed over to U.N. peacekeepers a Lebanese shepherd who was arrested near the border in southern Lebanon a day earlier.

A 12-strong Israeli force kidnapped Ismail Khalil Nabaa while grazing his flock on the heights of Jabal al-Saddaneh, north of the U.N.-demarcated Blue Line, the NNA said.

The NNA reported on July 16, 2012 that an Israeli force failed to abduct two shepherds from southern Lebanon.

It detailed that 20 soldiers crossed the border at Mount Hermon and infiltrated 500 to 800 meters into Shebaa where it tried to kidnap Mohammed Qassem Hashem from Lebanon and Ahmed Haidar from Syria.

Wondering WTF these shepherds were doing close to the border ,come on do you really think these zionists are stupid

@mo: Israel is allowed to protect its country. In 2006 Lebanon attacked Israel w/o provocation. If you are looking for crimes and violence, you have Syria, Iraq, Egypt Afganistan and Pakistan, where civilians are targeted daily.

Take your time filing these complaints; no rush! There will be plenty of more opportunities to file.

This complaint strikes me as the equivalent of polishing the brass while the house is on fire.

I wonder how long is the discovery period on these complaints.

I am inclined to give them the benefit of the doubt and write it off as computer glitches. My post also is gone. They were having trouble earlier with their site, so it could have been just technical problems.

I am inclined to give them the benefit of the doubt and write it off as computer glitches. My post also is gone. They were having trouble earlier with their site, so it could have been just technical problems.

Don't worry about the complaint ,fire some rockets on the Jews.

I certainly wouldn't suggest that the Lebanese Army shoot rockets towards Israel. If Israel had to, it would retaliate and Lebanon would be left in ruins, something that I believe neither government is interested in.

Unfortunately, that it almost what happened to the Jews in the Holocaust, so when they declared Jerusalem as the capital of the State of Israel in 1948, it is in full accordance with what you write.

You and your disgusting comments once again. And Naharnet allows this, shame on them too.

"January 13, 1983:
* Following three weeks of negotiations, Israel and Lebanon agree on an agenda for peace talks."
30 years later and still nothing.