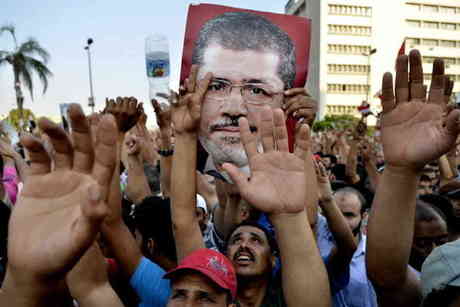 The United States on Friday urged the Egyptian military and interim leaders to free deposed president Mohammed Morsi for the first time since he was detained over a week ago.

State Department spokeswoman Jen Psaki said the United States agreed with Germany's earlier appeal for Morsi to be released and was "publicly" making the same request.

Morsi has been held in a "safe place," according to the interim leaders, and has not been seen in public since being ousted on July 3.

In past days, while condemning arbitrary arrests, Psaki had refused to say whether the U.S. administration believed Morsi should be freed.

Psaki said she was making the call for Morsi's release "today, publicly," but refused to say what had determined the U.S. change of stance.

"We've expressed concerns from the beginning... about his arrest, about the politically motivated arbitrary arrests of the Muslim Brotherhood members," she said.

U.S. officials had also been in regular contact with all sectors of Egyptian society, she stressed.

Morsi's Muslim Brotherhood and opponents of the removed president have called separate rallies across Cairo Friday amid fears of further bloodshed in the Arab world's most populous country.

"We continue to call for... the good treatment of those detained," Psaki told reporters.

Psaki said the interim leaders had "laid out a plan... but moving forward an inclusive process is what we would like to see."

"While we recognize that president Morsi was democratically elected ... it's about more than what happens at the ballot box. Most democratic transitions take years to take root and stabilize, especially following decades of autocratic rule."