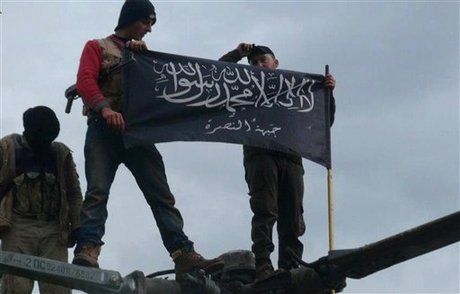 Syrian Kurdish fighters in the north fought fierce battles against jihadists and captured a commander of the Islamic State of Iraq and the Levant (ISIS) late Saturday, a monitoring group said.

"Battles pitting fighters from the Kurdish Fighters brigade against ISIS and other groups are raging on in several areas of Tal Abyad in Raqa province, after (Kurdish) fighters captured ISIS' emir in the town," said the Syrian Observatory for Human Rights.

Observatory director Rami Abdel Rahman told Agence France Presse the emir's nom-de-guerre is Abu Musab, though it was unclear whether he is Syrian or foreign.

The development comes just days after fighters loyal to the Committees for the Protection of the Kurdish People (YPG) expelled al-Nusra Front and ISIS from the strategic Kurdish town of Ras al-Ain in Hasake province.

The clashes in Tal Abyad, which lies on the Syrian border with Turkey, broke out after jihadists ambushed a school that Kurdish fighters in the town were using as a base, said the Britain-based Observatory.

Earlier Saturday, Kurdish fighters in the majority Kurdish province of Hasake expelled jihadists from a checkpoint and seized their ammunition.

Kurdish regions have been run by local Kurdish councils since President Bashar Assad's forces withdrew from the areas in mid-2012.

Since then, the Kurds have walked a fine line, trying to avoid antagonizing either the regime or the rebels, and focusing on maintaining security while strengthening control over their own affairs.

But this week alone, more than 50 jihadist and Kurdish fighters were killed in fighting in northern Syria, according to a toll released earlier Saturday by the Observatory.

Kurds represent about 15 percent of the Syrian population.

are you not against kurdish mercenaries? christians mercenaries and chiite mercenaries as well? Why are they still around? Or perhaps the PKK are sweet lovers of peace all of a sudden? shia sadr, badr, shabbi7a, hezballah, basij and amal militias are lovely? and christian mercenaries around latin america and africa, the US army and various christian militias in lebanon during the civil war are all just a bunch of peaceloving cuties.. Tfeh 3ala hypocrisy.

Kudos. Hoping for many more to come.

That doesnot mean that the FSA are unhappy with the kurdish finishing with this mukhabarati iranian syrian regime poisoned gift.
The strugggle is not between qaida and the regime ,but between a people coming from all social groups and parts of Syria against an ila al abad minority sectarian regime.And for the result :there is no doubt that Assad is not ila al abad

Many religions, many traditions, many believes but ONE enemy. There simply isn't any room for fundamental extremists that wanna rule with sharia law, the world is civilized and it's about time they catch up with humanity. No decent human being will stand idle and watch children get abused or woman be stoned in the name of honor. The way things are going,Syria will become the grave of Islamic extremists from all over the world and that's the very reason why no one will or is willing to support the terrorists in Syria except for the exporters of terror being KSA & GCC.

Dont confuse islamic sharia with what tom, dick and harry does. You say no decent human being will stand idle and watch children get abused or women be stoned? Excuse me, but that is exactly what has happened during the rule of secularist baathism. And the secular kurds have the highest percentage of honor killings in the world. Almost every honor killing that took place in europe was made by the secular kurds. There is no honor killing in islam. You say the world is civilized... WHAT? where is the civilized world? The US creates alqaida then fights them, she supports them in syria and fights them in mali. Billions of dollars were sent in "aid" by the civilized west to the developing countries allegedly while in reality, all that money went mostly as bribes to corrupt leaders willing to be puppets of the west. The world today is ANYTHING but civilized.

rebel spoke the truth clearly. Many people don't like it who read Naharnet. Harari fans will not like the truth much. Turkey won't like it either. The Kurds fighting and winning against NATO backed Terrorists will embolden them and lead to comsequences not only in Syria and Turkey but in Kirkuk and Iraq also. This is what Military Planners and CIA "intelligence" analysts call an unintended consequence.

Good for the Kurds. They deserve their kurdistan. The FSA should cooperate with them. The syrian regime is the enemy of all.