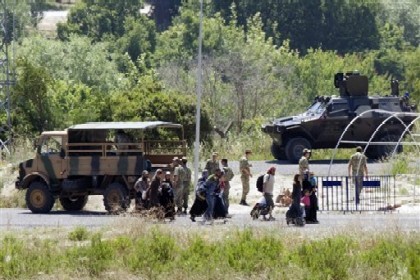 Syrian tanks on Saturday rolled into a village on the border with Turkey where workers are scrambling to erect a huge tent city for fear of a new exodus of refugees from the crackdown.

As families across Syria mourned 18 protesters gunned down by security forces on Friday, activists said troops backed by tanks rumbled into al-Najia village near Jisr al-Shughur, a town which the army seized on June 12 after repeated protests.

The operation came just days after the army moved into Khirbet al-Joz, another village near the border, and amid EU condemnation of Syria's resort to "shocking violence" against peaceful dissent.

"The army backed by tanks and troop carriers entered Al-Najia as part of its deployment in the province of Idlib," the head of the Syrian Observatory for Human Rights, Rami Abdel Rahman, told Agence France Presse in Nicosia.

Al-Najia lies on the road linking the northwestern city of Latakia to Jisr al-Shughur -- home to 50,000 people, most of whom fled after the army seized the town, many fleeing across the border to Turkey.

On Friday, the state-run SANA news agency reported that the army had "completed" its deployment in and around Jisr al-Shughur and quoted a military official urging villagers who had fled their homes to return.

The authorities blame "terrorist armed groups" for the unrest that has gripped Syria since pro-democracy protests broke out in mid-March and says the military deployments are aimed at rooting them out.

The army's sweep through protest centers in the northwest has sent nearly 12,000 Syrians fleeing to safety in neighboring Turkey, which is scrambling to build a giant tent city on its border with Syria.

More than 200 tents have already been erected in the camp while another 1,000 are due to be ready in a week in the village of Apaydin, in Hatay province on the border, with a capacity to accommodate up to 15,000 people, village headman Omer Cagatay said.

"We, as the Red Crescent, guarantee that the Syrian government will not call (the refugees) to account and under no circumstances will security forces take decisions about them," Attar was quoted as saying.

Syrian President Bashar Assad on Tuesday ordered a general amnesty in a bid to quell rising unrest, a day after offering a "national dialogue."

But tens of thousands of Syrians calling for the regime's ouster surged onto the streets on Friday in response to a call by the Facebook group Syrian Revolution 2011 -- motor behind three months of anti-regime protests.

Friday's protests were held under the slogan "Fall of legitimacy," with a Facebook page message reading: "Bashar is no longer my president and his government no longer represents me."

Five people died in the Damascus neighborhood of Barzeh, six in the town of Kiswah, south of the capital, and seven in and around the central city of Homs, they said.

Dozens were rounded up in house-to-house searches in Barzeh and a curfew imposed on the neighborhood, activists said. The London-based Observatory spoke of more than 70 arrests in Mareh near Aleppo.

Protests in Aleppo, Syria's second city, have been muted since the pro-democracy protests erupted in mid-March.

But the Syrian Revolution 2011 called on demonstrators to "get ready for a volcano" in the city next Thursday, in a message posted on its main Facebook page.

The Observatory says 1,332 civilians have been killed in the government's crackdown and that 341 security force personnel had also lost their lives.

EU leaders adopted a declaration in Brussels on Friday denouncing "in the strongest possible terms the ongoing repression and unacceptable and shocking violence the Syrian regime continues to apply against its own people."

This week, the European Union expanded its sanctions against Syrian leaders to embrace 23 senior officials, including the embattled Assad, and three commanders of Iran's Revolutionary Guard accused of aiding the crackdown.

Don't worry, all these people crossing the border are terrorists and people on hallucinogenic drugs (especially the elderly and children), because we know the Assad regime would never hunt down the innocent...