Miqati: Govt. Rejects EU Decision on Hizbullah, Will Seek to Reverse It 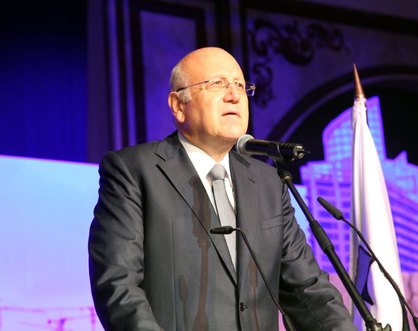 “It has become evident to everyone that the situation is not fine and that overcoming the stalemate will require concessions from everyone,” Miqati said during an iftar banquet organized by the Social Welfare Institutions at the BIEL exhibition center in Beirut.

“We call on everyone to sacrifice their narrow political interests for the sake of the country's interest,” Miqati added.

He warned that “it has become easier for Lebanon's enemies to act in an unhealthy environment and they are working night and day to undermine the country's stability and prevent its progress and prosperity.”

The premier said he was hoping the EU would refrain from designating Hizbullah's “so-called military wing” as a “terrorist organization” due to the possible “negative impact on Lebanon and the Lebanese components.”

“We will follow up on the issue through the diplomatic means that preserve the best ties between Lebanon and Europe and the international community, and here I will reiterate what I have always been saying: Lebanon has no enemy but Israel and Lebanon with all its components is keen on its Arab and international relations,” Miqati added.

“The Lebanese government rejects this decision and will seek to reverse it through its nonstop contacts with all EU member states,” he went on to say.

On Monday, the EU placed Hizbullah's military wing on its list of “terrorist organizations.”

Hizbullah described the decision as a “hostile and unjust” step, saying it was “written by American hands and with Zionist ink.”

"Hizbullah firmly rejects the EU decision... and sees it as a hostile and unjust decision that has no justification and is not based on any proof," the party said in a statement.

To get the required agreement of all 28 EU member states, European foreign ministers had to overcome reservations of some members that the move would further destabilize Lebanon, where Hizbullah plays a key role in politics.

Hizbullah's military wing was blamed for a deadly attack on Israeli tourists in Bulgaria last year.

In March, a self-confessed Hizbullah operative was also convicted in Cyprus of plotting a similar attack.

Lebanon had asked the EU not to blacklist Hizbullah on the grounds it was an "essential component of Lebanese society."

Support for the EU sanctions against Hizbullah grew in recent weeks after the party openly declared it was sending fighters to back the Syrian regime.

inside_man, although I don't agree with anything you said above, I have to say, it was funny your comment about Harriri... Leave he guy alone; I know for sure he can read Arabic ...

Miqati better hurry up before the powers that once were and are no more send over to our shores the Cole accompanied by the two other destroyers, the USS Joseph Lieberman and the USS John McCain. najjina men al adrat! takbir

WHy is anyone surprisedd that Miqati and Aoun are against the EU decision. Miqati is Assad's friend and business partner and Aoun has the political agreement with HA. So it is expected that they voice what they did. However, if HA was to go away suddenly I am sure Aoun and Miqati will both be happy within.

everybody knows it, but not everyone can admit it...

When we say that H.A. is a bunch of terrorist (in fact they are an unofficial branch army of Iran, or call them hingemen doing Iran's dirty work so Iran keeps her hands clean for as long as possible) it does not mean that we agree with "your" other side. As far as we are concerned there are no sides. The radicalized from both parties can leave Lebanon, go to hell and take Israeli / Palestinian problem with them.

What government?? Does one really exist in our beloved nation!

It's a greater day for Lebanon than the 22nd November ! All public offices and schools should be closed ! Mr Mikati You are contemplating those who killed your predecessor, your colleagues, ordinary lebanese, committed foreigners to lebanon in the 80's, foreigners abroad, ordinary syrians....They are the ultimate in treason to their country! They are the ultimate in lies and twisted evil minds! In foul play. Only justice , accountability, and punishment, will bring down the hatred this criminal basij movement has spread in Lebanon and across the Middle East against it !