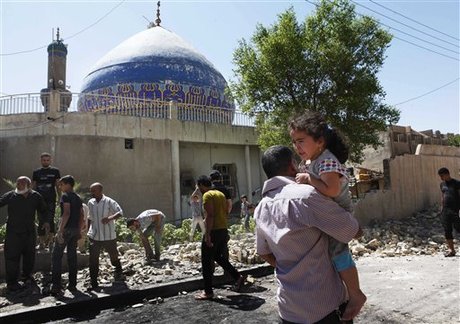 July was the deadliest month for Iraq since 2008, when the country was emerging from a bloody sectarian conflict, Iraqi government and United Nations figures released on Thursday showed.

Authorities have failed to stem the rampant violence, which has killed more than 3,000 people since the beginning of the year.

"We have not yet overcome the ordeal," the Maliki said in remarks broadcast on Iraqiya state TV. "The challenge is great and will remain dangerous."

But Maliki was defiant, saying: "Iraq is in a confrontation that we will not lose".

Maliki said the country has suffered "security setbacks" but added "security has not collapsed."

Senior officials including Maliki rarely comment on the violence plaguing the country.

Iraqi government figures published on Thursday put the July death toll from violence at 989, while the United Nations said 1,057 people were killed.

The deadly unrest continued on Friday, when attacks in northern Iraq killed seven people, including two police and four soldiers, and a bombing in Baghdad left another person dead.

Maliki also accused unspecified "neighboring countries" of backing militants in Iraq, and said it would come back to haunt them.

"No one should imagine that he can interfere and set a country and its people on fire" while escaping "the interference of others in their affairs," Maliki said.

But experts point to widespread discontent among members of Iraq's Sunni Arab minority as a major factor driving the heightened violence this year.

Sunnis accuse the Shiite-led government of marginalizing and targeting their community, including with unwarranted arrests and terrorism charges.

Protests erupted in Sunni-majority areas of the country at the end of 2012 and are still ongoing.

While the government has made some concessions aimed at placating protesters and Iraqi Sunnis in general, such as freeing prisoners and raising the salaries of Sunni anti-al-Qaida fighters, underlying issues have yet to be addressed.