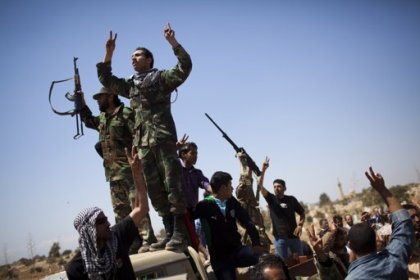 France has air dropped arms to Libyan rebels in mountains south of Tripoli who are eyeing an assault on the capital, it said Wednesday, a day after anti-regime forces captured a network of weapons caches.

But the increasingly emboldened rebels were under a deadly assault from veteran strongman Moammar Gadhafi's forces in the third-largest city Misrata, where rockets killed one civilian and wounded six late Tuesday, residents said.

In London, meanwhile, British Foreign Secretary William Hague said on Wednesday the cash-strapped rebels had received the first $100 million (70 million euros) from a fund set up by international donors.

France's Le Figaro daily said Wednesday it had seen a secret intelligence memo and talked to well-placed officials, saying the air drops were designed to help rebels encircle Tripoli and encourage a popular revolt in the city itself.

It said the arms were unloaded from planes above the Djebel Nafusa region, where Berber tribes have risen to join the revolt against Gadhafi's four-decade rule and seized several provincial towns.

"If the rebels can get to the outskirts of Tripoli, the capital will take the chance to rise against Gadhafi," said an official quoted in the report.

Burkhard said France had become aware in early June that rebel-held Berber villages in the Djebel Nafusa region had come under pressure from Gadhafi loyalist forces.

"We began by dropping humanitarian aid: food, water and medical supplies," he said. "During the operation, the situation for the civilians on the ground worsened. We dropped arms and means of self-defense, mainly ammunition."

Burkhard described the arms as "light infantry weapons of the rifle type" and said the drops were carried out over several days "so that civilians would not be massacred".

On Tuesday, rebels overcame heavy multiple rocket fire from loyalist troops to seize bunkers in the desert about 25 kilometers from the hill town of Zintan, an AFP correspondent said.

The capture of rockets, machine guns and other munitions was a major boost for rebel hopes of driving on to Tripoli from the front line on the other side of the Nafusa mountains, now just 50 kilometers from the capital.

They found crates of assault rifles, machine guns and rocket-propelled grenades, it said, and also European-made Milan anti-tank missiles, a powerful addition to the rebel arsenal that can destroy a tank or a bunker.

In Misrata, meanwhile, residents said between eight and 10 rockets struck the city, which has come under repeated assault by surrounding loyalist forces and is entirely dependent on resupply by sea.

An AFP correspondent was shown four damaged buildings residents said had been hit by the late night salvo.

In London, Hague told lawmakers the National Transitional Council (NTC), the rebel leadership based in the eastern city of Benghazi, had received in the past week the "first $100 million of international funding through the temporary financing mechanism set up by the contact group for vital fuel and salaries."

The rebels complained earlier this month they were running out of money and had not yet received any of the roughly $1 billion promised by international donors.

In other developments, Gadhafi's health minister, Mohammed Hijazi, was in Egypt on Wednesday to ask officials for medical supplies to meet shortages in Libya, the official MENA news agency said.

He is to hold talks with Egyptian officials to "ask them for medical support so that the Tripoli government can meet the increasing need for medical supplies," MENA said.

On Monday, Hijazi was in Tunisia with Social Affairs Minister Ibrahim Sherif for talks with international parties on efforts to halt the conflict, Tunisia's TAP news agency said on Monday.

A senior rebel official said the same day they were expecting to receive an offer from Gadhafi "very soon" that could end the four-month-old war.

Abdel Hafiz Ghoga, vice chairman of the rebels' National Transitional Council, said intermediaries had indicated a proposal from the Libyan strongman was in the works.

The NTC was not in direct talks with Gadhafi but understood through contacts with France and South Africa that an offer was being prepared, he said.