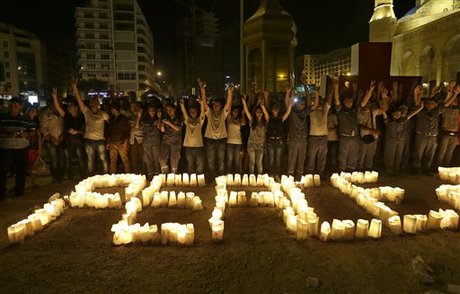 Sporadic gunfire was heard on Saturday in the northern city of Tripoli as gunmen erected checkpoints and began inspecting the ids of passersby, a day after two deadly blasts that targeted the city.

The calm in the city was violated by intermittent gunfire, in particular, in Bab al-Tabbaneh neighborhood and the area surrounding it, the state-run National news agency reported.

Voice of Lebanon radio (93.3) reported that fire erupted in a car on Friday over night in the city near al-Mallouleh bridge after unknown assailants opened fire at it.

Several media outlets also reported that gunmen established checkpoints across the city and began inspecting ids of passersby and vehicles.

Al-Jadeed channel reported that the Lebanese army cordoned off Abou Ali roundabout in Tripoli after information obtained on a suspicious car.

Meanwhile, the residents of the neighborhoods surrounding al-Salam and al-Taqwa mosques and civil defense teams began removing the mess caused by the blasts amid heavy army and security forces deployment.

Some residents used shovels and brooms to clean up shards of glass and shrapnel that littered the pavement in front of nearby shops.

A team of forensic experts was sorting through the mangled wreckage at the blast sites.

Tripoli has seen frequent Syria-related violence during the past two years, including waves of deadly clashes.

Lebanon is officially neutral in Syria's conflict, but the country is deeply divided.

So cute those peace loving lebanese in this photo. Once they go home and sit at their keyboards, one turns into a flamethrower, another into a mowaten, a karim, a southern, a wolfe, and openly discuss their views:)

SHIA HEZBALLAHT IRAN, the evil satanic cult who claim to love Hussian ra, I swear if Hussian was alive he would be the first to put a sword to the radidah zoroastian shia/

RFT, tiger tony is jaleous you didn't mention his name ;-)

with each region exerting their own security measures, we are slipping fast now into civil war.

No. Phil, to Christians and to Muslims who beleive in democracy.... Nasrallah has always been a terrorist, the EU just opened its eyes.... 3abel Russia and China also realize this.

This reminds me of the 70's when gunmen started roaming the streets. SHame on us for siding with foreigners against our own people.

This reminds me of the 70's when gunmen started roaming the streets. SHame on us for siding with foreigners against our own people.

There is still hope..

Why are you so often insulting each other in these comments instead of discussing how you can overcome the differences and strengthen Lebanon instead of only supporting a specific leader, tribe or religion?

so tigertony
you are advocating harmony amongst all Lebanese huh?
you could have fooled me dude!!!

Bachar instigated this because he's about to fall off his throne.
I do hope Asma will get her share of punishment like ex 1st lady ben Ali.

LAF just let hundreds of hizbos cross to Syria for an assault on East Ghouta, to finish off those people that have just been gazed...
This army is supposed to protect us, even Vichy did not collaborate that much with the nazis...

Phénix, ma khtalafna there is a Syrian hand behind the past tragic events. But not any Syrian hand, we have another Samaha on our soil. And most likely a backup to the second one as well.(if I were Bachar, I'd have learned from my previous mistake). But m14 isn't accusing M8 of being behind the attacks, but a composant of the m8 alliance: Hezbollah. They are Bachar's tool in Syria and Lebanon although they serve two masters. One in damascus, and another one in Tehran. I keep repeating the same thing, if we want to move on and to forgive the followers, we need to judge the leaders for their crimes. We've been waiting since 2005.... And those laws of amnesty won't do it. Imagine, even Pakistan is more democratic than Lebanon. They arrested Musharraf for the assassination of Bouto.

We need the same here with Nasrallah, and the other accomplices.

big difference between people arguing on naharnet, and thugs with yellow teeth and Zulfiqar tatoos humiliating/abusing sunnis with beards or niqabs at dahieh/arsal checkpoints.