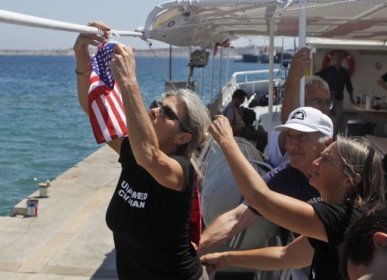 A U.S. vessel aiming to break Israel's naval blockade on Gaza sailed from Greece Friday but was promptly stopped by coastguards for defying a ban, an activist on board said.

The Audacity of Hope set sail for Gaza without warning, leaving behind nine other ships in a pro-Palestinian international flotilla.

"The captain is speaking to the coastguard now. We've not turned around and we don't intend to," activist Donna Nevel told Agence France Presse by telephone.

The Audacity, which hopes to break Israel's naval blockade on Gaza and is carrying 3,000 letters of support for Palestinians, left behind nine other ships which had planned on taking part in the 2011 "Freedom Flotilla."

It set sail without permission from Greek authorities, who were investigating a claim lodged by an Israeli law firm that it was not seaworthy.

"The coast guard has positioned itself in front of the boat," said Jane Hirschmann, an organizer in contact with the ship from the shore, adding the captain had been told to turn around for safety reasons.

Captain John Klusmer was negotiating with coastguards who have said the U.S. flagship could return to any Greek port but could not advance, she said.

Greece's citizens protection ministry said Athens had forbidden all vessels from sailing for Gaza from Greek ports and was taking all necessary steps to implement the decision.