Bahia Hariri 'Returns' to the 'People' More than LL525 Million 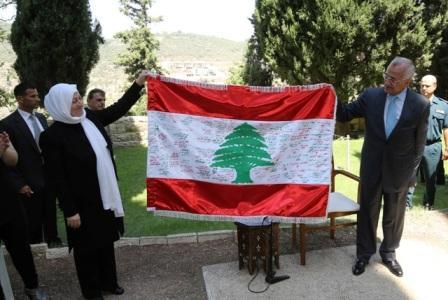 Al-Mustaqbal bloc MP Bahia Hariri “returned” on Sunday more than LL525 million to the Lebanese people, the salary that she has received since her election in 2009.

During a ceremony held at Beiteddine palace, the summer residence of President Michel Suleiman, Hariri said: “I apologize to the Lebanese people for not doing my job since 2009. I have received from the people a paycheck that I don't deserve.”

The Sidon MP said during the ceremony on the anniversary of the establishment of Greater Lebanon in 1920 that Suleiman would supervise the fund as an honorary president until 2020 in cooperation with the Banking Association.

She expressed hope that other MPs would walk in her footsteps and write similar checks to work on planning the appropriate legislation that would make Lebanon in 2020 a country of innovators.

Not a bad salary $350,000 for 5 years work(?) Do all Lebanese MP's get $70,000 a year? No wonder they want to extend the period of the present parliament instead of having to face elections and possibly lose their seats.

This is not a big salary. I make this salary in a year as a certified accountant working in saudi Arabia.

Y am I not surprised Ice-Man?

So only at least $60 billion USD to go that your family still owes the Lebanese people.

How about Berri and Jumblat and Aoun and all others also do the same? Berri and HA get from the Airport and Seaports Billions every year. And the electricity they steal amounts to Billions as well. All of them owe the Lebanese people a whole lot.

Yea i know that it might just be a political PR move and getting ready to elections and stuff. But hopefully this will push other political factions to do something similar and maybe more

$70k is much? I am not sure where you live but I get paid more than that and i only work in IT. This is merely a publicity stunt nothing more nothing less. Do you really believe this is all they make? Be sure mate their pockets are so deep the $70k is only for the sake of saying they are getting paid.

After all, lebanon is being robbed by these MPs day and night. They all need to go!

Do you mean that $70,000 is not the full salary of a Lebanese MP, and that she is hiding a good part of her salary? Can someone tell us the exact sum an MP earns (mind you, none of them earn anything now that parliament is not is session,) thanks to Mr. Berri.

Merci Sit Bahia. Finally someone honest. All MPs should return their salaries since June 2013, no elections were held, none can justify his salary because they aren't working. 19.000$/ month each under the M8 government. Previously it was 11.000$ and it was already too much. Obama's salary is barely higher than this.

"Honest"? hahahahahaha
Nice PR campaign Bahia...
Others dont advertise their honesty and generosity...Mikati has been 'returning' his salary 'to the people' for a long time...

Oh Bahia, you and your clan owe the people alot more than that.

and the billions that hizb iran destroyed with its 'war' with israel, and not to mention all the land, electricity, and other resources it has stolen throughout the years.

why aren't they paying that back?

Yes and no.... Your friend Gaby Layoun allowed the construction of the Venus Towers on Phoenician heritage last year. Downtown Beirut is a jewel, if you condemn it sincerely, don't set a foot in it and boycott it. The same applies to Beirut Rafic Hariri international Airport or hospital. Next time, take a boat ;-) hehehe

Well said Phoenician, they are trying to destroy our heritage. For all the so-called money she is returning, her and her family robbed Lebanon multiple times over.

I swear this country will never be. Just read some of the comments here and you get convinced. Regardless of whether you politically support Mrs. Harriri or not, it is a welcomed gesture and should be applauded. Haram this country!

I think the Harriri clan owe a lot more to the Lebanese people, this amount is only mere change accumulated at the bottom of her hand bag that she needs to get rid of due to the weight on her shoulders. Instead she should have stood by the LAF that have sacrificed themselves defending our country against terrorism during the Asir incident & personally looked after their families they left behind, but instead she & her colleagues defamed, degraded & undermined their efforts by defending a criminal & his supporters. In reality a poor person that donates only One Dollar & has no home or savings against his name has given more than her when she is worth more than $3 billion , would she be willing to give her life savings ? A person that does a good deed to others should not advertise it. But anyway maybe it might be that a heavy Burden is off her guilty conscious ...who knows .
Signed Wolf .

How did Aoun launch OTV? Or Berri NBN? We know Future TV comes from KSA petrodollars..... But the two I mentionned before come from theft and crime!

and the president of otv is whom again....

you guessed it, another family member of the former general..

I guess -..FT..- has a list of all the shareholders because everything is traceable.

Yes, she took a salary she doesnt deserve, now she's trying to take the credit that she doesn't deserve. Sick.

well if she admits she was elected and did not do her job, she should be tried and jailed

Returning the 525 million LP is certainly a good gesture and we thank MP Bahia Hariri for it.
But what about DOING something concrete for Lebanon, besides giving back that money?
We hope, for instance, that MP Hariri will make sure that that the future Minister of Education will think of exhumating the Education Plan of Minister Hassan Mneimne from the archives and arrange to start implementing it as soon as possible. This would benefit Lebanon TEN THOUSAND TIMES MORE than the check that she returned to the Treasury.

What about 3ammo Fouad (Saniora) and his bunch? They could also follow 3ammto Bahia's example to help reduce the financial deficit!!