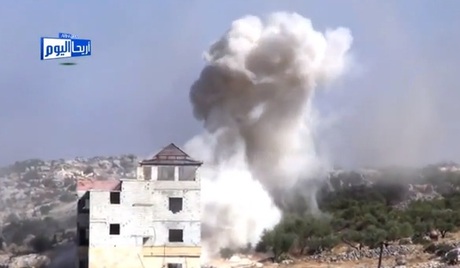 The army retook control of a strategic town in northwest Syria on Tuesday after 10 days of intense bombing and clashes, the Syrian Observatory for Human Rights said.

"Armed forces, backed by paramilitary soldiers, retook Ariha after 10 days of shelling" of the town, which on August 24 fell to fighters from rebel factions including the Islamist group Al-Nusra Front, it said.

Observatory head Rami Abdel Rahman told Agence France Presse that the town in Idlib province had been virtually emptied of its residents and armed forces and pro-regime militias were currently on a looting spree.

His Britain-based group relies on an extensive network of activists, doctors and lawyers on the ground for its information.

Ariha was of "strategic importance" as it is located on the main road linking the large town of Idlib to the coastal city of Latakia, Abdel Rahman said.

"The regime managed to retake the town in ten days," he said. "The town was hit last week by air raids and artillery fire, and on the ground, violent clashes opposed the army and paramilitary forces against rebel armies."

The army was on Tuesday also bombing Jabal Arbain, a mountain near Ariha, to try and retake control there, the Observatory said.

Armed forces control the majority of Idlib town, while rebel fighters exert power on large parts of the province of the same name.

More than 110,000 people have been killed since the conflict broke out in March 2011 with an uprising against President Bashar Assad's regime, including over 40,100 civilians, according to the Observatory.