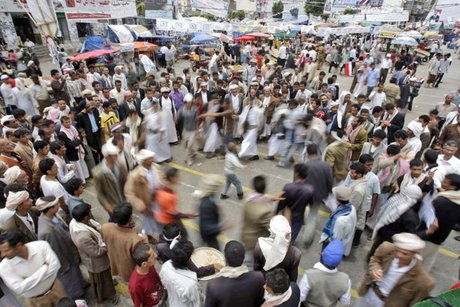 The six members of the Gulf Cooperation Council (GCC) "continue to conduct intensive consultations with parties in Yemen to overcome the crisis," Abdullah told Agence France Presse late on Tuesday.

He expressed hope that the contacts would "lead to progress in reaching an agreement between the opposition and the ruling party."

Protesters have been calling since January for President Ali Abdullah Saleh to quit office after more than three decades in power.

Abdullah also said that a stalled GCC initiative that would see Saleh step aside 30 days after it was signed in exchange for immunity from prosecution "is still on the table."

The opposition agreed to the proposal but Saleh has refused to sign.

Yemeni security forces and government supporters have carried out bloody attacks on protesters, while opposition tribesmen have battled government forces in the capital Sanaa and elsewhere, and some military units have defected to the opposition.

Saleh has been receiving treatment in Riyadh for more than a month, since he was wounded in an attack on his palace in early June.