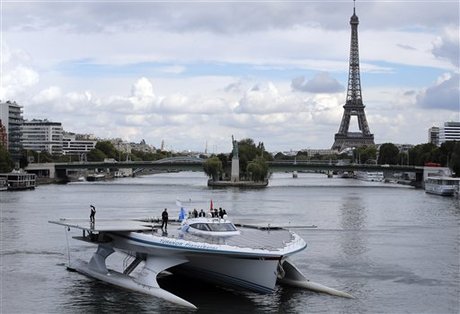 After several years in the doldrums, demand for upscale Paris properties is starting to pick up with an unlikely helping hand from upheaval in the Middle East.

With the bloody Syrian civil war generating fears of instability across the region and Egypt teetering on the brink of chaos, well-heeled Arab investors are looking for boltholes and Paris is a perennial favorite destination for their funds, according to real estate professionals.

Typifying the trend was the recent sale of a 2,600-square-meter (28,000-square-feet) townhouse in the plush 16th district of the French capital. Specialist agents Daniel Feau revealed that the 19th-century building had been snapped up by a well-connected family from the Gulf at a downturn-defying 44 million euros ($58.5 million).

Upbeat players in the Parisian real estate business say the deal reflects a noticeable bounce in the market for residences starting at one million euros.

Over the last year, such assets have fallen in price by around eight percent, Feau estimates, and that slide has helped to tempt buyers out of their shells.

Emile Garcin, another agency specializing in the top end of the market, says there has been a correction of some 15 percent over an 18-month period in which the French economy has been, at best, stagnating.

"Many buyers, particularly Lebanese, are very concerned by the situation in Syria and they are following friends and family who have already moved to Paris, where there is already a large Lebanese expat community," Charles Marie Jottras, the chairman of Daniel Feau, told Agence France Presse.

A number of wealthy Syrians have also sought refuge in France from a conflict that has steadily intensified since March 2011.

"Paris, like London, has a long tradition of welcoming people from the Middle East," Jottras added. "The younger generation from the oil kingdoms may have preferred to go and study in the United States but that generation are coming back here now."

The trend has also been noted by Emile Garcin's Nathalie Garcin.

"We have had a lot of Lebanese clients registering with us this week," she said. "It's mainly families who are worried, they don't want to leave everything in their country and they are also investing in London.

"It's a taboo subject, they don't really want to talk about it, but the anxiety is palpable.

"We've also had a lot of buyers from Qatar."

While the interest from the Middle East appears to be influenced by a particular context, American and other international investors are also waking up to the fact that Paris is suddenly looking attractively priced.

"There is a feeling that it is a good time to secure a bargain," Jottras said, adding that concern over the fiscal plans of the Socialist government that took power in 2012 had receded.

"The idea of France becoming a tax hell is fading: the Americans have realized that the vast majority of the new tax measures will not apply to them."

Russian and Chinese investors have also been active in the Paris market, but the buoyancy of the capital is not reflected in other desirable parts of France.

Even in sought-after locations such as the Riviera or the Luberon region famously celebrated in Peter Mayle's "A Year in Provence,” prices for characterful properties continue to stagnate or decline as many current owners decide to cut back on second homes.

This is true, HA and Assad caused most of this. However, most of us who feel this way, forget the Palestinian/Sunni alliance that started this before Assad/HA. I would agree that for many years it has been HA/Assad, but more recently we have had more wackos attacking our army, kidnapping and running around with bombs.

These Lebanese "bolstering" the Paris property market will fall on their head very soon. Paris is extremely expensive and is only for the very very rich. They might get an appartment there. And then what? Can they work in France? no jobs there, no opportunities, everyone eats everyone there, they will spend their savings. TRue, lebanon has its problems now, but France has its share too, and not economic only, I would be more scared to walk in a banlieue in the evening than in our homegrown dahieh...

Parisian real estate is undervalued...stop your silly political bickering and go to work! :)