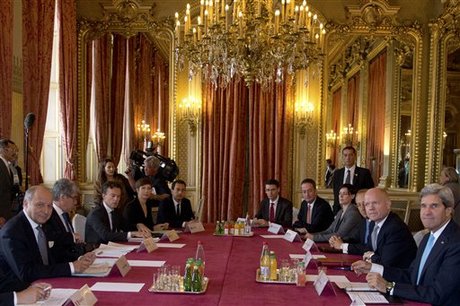 Britain, France and the United States on Monday agreed to step up their backing for rebels fighting Syrian President Bashar Assad.

The three powers also agreed at talks in Paris that Assad would face "serious consequences" if he fails to comply with a U.N. resolution setting out a timetable for the handover of Syria's chemical weapons to international control, French Foreign Minister Laurent Fabius said.

U.S. Secretary of State John Kerry did not use the word "serious,” saying: "If Assad fails to comply with the framework we are all agreed that there will be consequences."

Kerry, who agreed the terms of the weapons handover with his Russian counterpart in Geneva on Saturday, said the allies were committed to keeping up the pressure on Assad.

"If the Assad regime believes that this is not enforceable and we are not serious, they will play games."

Fabius announced there would be a major international meeting with leaders of the Syrian National Coalition on the sidelines of the U.N. General Assembly in New York next week.

"We know that in order to negotiate a political solution, there has to be a strong opposition," Fabius said.

French officials said Russia had been invited to the conference.

Kerry also stressed that the allies were "committed to the opposition" and said Assad had "lost all legitimacy to be possible to govern his country."

The signal of support for the rebels came in reaction to criticism of the chemical weapons deal from opposition leaders, who fear it could consolidate Assad's grip on power.

U.S and Russia are playing Syria and the middle east all together, those two big countries are Allies and they are managing their businesses and sharing our wealth, selling weapons to both sides and leaving the sides equally strong so they drain more and more of our oil money and lives!
Those gambling on the LOVE of the Russians to Syria or Arabs is hyper stupid, Russians are back to the international scene like a hungry shark and is sharing our flesh with his biggest brother the U.S!!!
What r we in the equation? absolutely nothing!

FSA and Qaeda/Nusra are not the same ya roar! They fight the same enemy but not for the same purpose or ideology... is that so hard 4 u 2 understand...?

roar. I know that the takfiris are criminals, rapists, cannibals etc...
However, why do you keep on cheering for Assad?
You honestly think Assad is good for Lebanon?

The problem with the sumbag islamists ya FT, is that when you kill one... another hundred pop out! If the FSA had received support from the West from the start, things could have turned better... mais avec des si...

Patriot. True. FT has single neurone thinking. He thinks that the islamists come from a finite reservoir and if you kill one, it is one less in the reservoir.
He is so blinded by his takfiri fear that he does not see the dynamics of the situation, the more you kill, the more you create.

The West is these three walking-wounded senior citizens (US, UK, and France), but I have to remind myself that the government in the US is not much more of a democracy than that in Lebanon, and not any more effective, therefore.

See that is the problem here on this board and in Lebanon. Assad is bad for Lebanon, and so is the Opposition. We need to keep both out of Lebanon. We should not have to choose Assad or FSA. We do not need change, just for the sake of it. It is not wise to take sides. What we should be doing is strengthening Lebanon from within. The road to Lebanese success as a country is not through Homs or Damascus or Aleppo. Its internal strength (independence) first and brotherly relations with our neighbors second.

the main problem zahle is that we have hezbis governing lebanon... they are the real key to a weak country. and they intend to maintain in that way to keep their power influence and weapons... they impose their agenda on the country. try to disagree and they either block the parliament, the gvt or take to the streets!
till one party has the power to be more powerful than the army the institutions then lebanon shall remain weak for the greatest pleasure of the israelis....

haha.. and you say i insult...
not sure how anybody understands that weapons are now coming in directly from the USA (albeit small arms) is a sign of them being deserted.
Assad=mass murdering egotistical, wanna be bigger than i actually am, let me hurt Lebanon and send bombs with Smaha, where my goons' goons will justify and stick to the line.
more importantly.. IF it is Assad does win he has been cut down to size..

if you dont take what you said, and is now deleted (dont blame me i dont waste time with reporting) but my "loyal following" and insult.. then i really dont know what to tell you.
7aboob Assad LOST and LOST big.. he destroyed the country.. lost Syrias deterrent against Israel..
and i never said he would fall.. on the contrary.. i asked for the situation to remain.. which it did.. and weaken assad.. Not a single Lebanese OR Syrian will fear Assad or the Bath, and their tyrannical system of governance..
why is him lasting an indicator of him winning? why is his inability to control some lightly armed insurgents not an indicator of his loss? biased.
Assad was never elected.. and the opposition had no obligation to talk to an un-elected "president".. he should have stepped down and saved his country from becoming a failed state.. he didnt..

Basically the Assad govt = maniac has been screwed by his "ally".