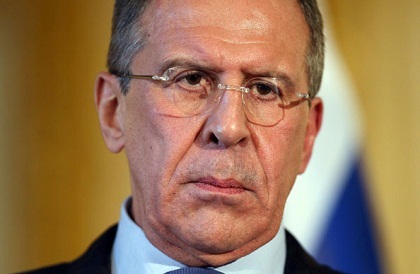 Russian Foreign Minister Sergei Lavrov on Monday warned that talks by some western countries on a tough United Nations resolution on Syria could wreck peace efforts, but said he was "convinced" the U.S. would adhere to the framework it drew up with Russia.

He spoke after Britain, France and the United States at a meeting in Paris agreed on the need for a "strong and binding" U.N. resolution on the transfer of Syria's chemical weapons to international control.

"If for someone it is more important to constantly threaten, to scare, to seek for an excuse for strikes... that is another path to wrecking completely the chances of calling the Geneva-2 conference," Lavrov said, referring to peace talks proposed by Russia and the United States.

He was speaking at a joint press conference with his Egyptian counterpart Nabil Fahmi in Moscow.

Lavrov added however that he is "convinced that despite those announcements... the American side will firmly adhere, as a normal negotiating partner, to what was reached" at talks with Russia in Geneva on Saturday.

Lavrov and Kerry announced a proposed deal under which Syria would hand over its chemical weapons for destruction by mid-2014 in talks that ran into a third day.

Lavrov said that Russia opposed proposals by Western powers to swiftly pass a U.N. Resolution on Syria including the use of force, which would need to be sanctioned under Chapter Seven of the U.N. charter, stressing that Russia and the United States did not call for this in their agreement.

"Chapter Seven was the subject of fierce debates at the U.S.-Russia talks. As a result, it is not in the final text, but our partners want to replay what we agreed in Geneva with the Americans," Lavrov said.

He appeared to be referring specifically to the use of force under Chapter Seven of the U.N. Charter.

The framework agreement drawn up Washington and Moscow in Geneva on Saturday, says that the United Nations resolution "should provide for review" of Syria's compliance on a chemical weapons ban.

It says that in the case of non-compliance with the terms of the new international ban on chemical weapons, the Security Council would urgently review the issue and then "could impose measures under Chapter VII of the U.N. Charter" without specifying the use of force.

"That will be an absolutely different resolution," Lavrov said, "and nobody can say as to what its contents would be".

Declarations "by some of our partners" that a resolution listing measures under Chapter Seven should be passed in the next few days "show lack of understanding of what we agreed on with John Kerry, and even unwillingness to read this document," he said.

The opposition doesn't want to attend the Geneva 2 convention now that you and the western powers bought Bachr another 9 months without judging him for his crime against humanity.

How is this related to Minister Lavrov?

this is just a ploy by france the US and britan to save face in front of the rebels that way they can say that we tried to use force but Russia wont let us. these guys are such idiots they are openly supporting the idea of extremists in Syria just so they can remove bashar lets not forget that half if not all of these rebels are only fighting because they have turned this into a sectarian war and to turn a secular country into a hardline islamist state

No worry Lavrov, you good. while the envoy presses on moving, the dogs start barkings. Its normal. Dogs, beside obeying their masters: Israel, they bark. You can not do anything about it. Opps: I mentioned the word Israel in a negative term hence I will be deleted from this site