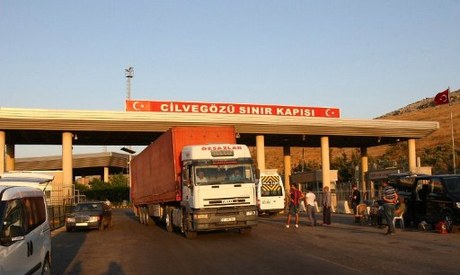 A car bomb exploded at the main entrance to Syria's rebel-held Bab al-Hawa border crossing into Turkey on Tuesday, a monitoring group said.

"A car bomb hit the main gateway to the Bab al-Hawa border crossing with Turkey," said the Syrian Observatory for Human Rights, which could not immediately verify whether there were any casualties.

Tuesday's was the second car bomb attack on the crossing.

On February 11, one exploded in the area that lies between the Turkish and Syrian control posts and killed 13 people, among them three Turks.

Elsewhere in Syria, loyalist troops seized control of parts of a town located on the strategic road linking Damascus to the international airport, said the Observatory.

Clashes pitting rebels against troops raged on in the town of Shabaa, where fighting on Monday killed at least 11 opposition fighters.

State news agency SANA said loyalists "seized control last night of the town of Shabaa, after a special operation that was speedy and surgical, and which was aimed at capturing the most dangerous terrorist groups there".

Pro-Damascus channel Hizbullah's Al-Manar, said loyalists found "a 500-meter (yard) tunnel parallel to the Damascus airport road, that the terrorists were using to hide and fire... from".

Al-Manar screened footage it said was taken inside Shabaa.

It also showed footage of the advancing army, whose tanks fired at buildings in the town.

The Syrian army has struggled for months to stamp out rebels positioned around Damascus.

Before this "blessed" revolution, we had never heard of gun shooting or bombing in Syria. Except for the period of 1978-1981, Syria was very civil and peacful country. As a matter of fact, Syria between 1980-2011 never had any honor crime where all the region witnessed a surge in honor crime against women. Now, for analysts, the wat now is sectarian. For logic: the war is terror cluture against civil one. Pick your choice!