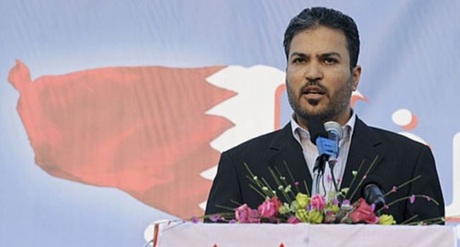 Bahraini authorities referred former Shiite opposition MP Khalil Marzooq to the public prosecutor on Tuesday, the interior ministry said, with the opposition saying he has been accused of inciting violence.

Marzooq, a prominent figure in the main Shiite opposition Al-Wefaq formation, has been "summoned and referred to the public prosecution," the ministry said on Twitter.

The ministry's statement follows calls from Al-Wefaq to release Marzooq, saying he was being held for questioning after police summoned him to Al-Budayia station, west of Manama.

Former MP Ali Alaswad said that the police had called Marzooq in over a speech he gave last Friday.

"He is accused of encouraging youth to engage in violence and trying to topple the regime," Alaswad said.

Al-Wefaq also condemned the summons in a statement issued on Tuesday, calling it "a clear attack on political activism in Bahrain," adding that it "reflects an intensive effort by the regime to further complicate the situation" in the country.

Marzooq served as deputy speaker in the 40-member parliament before 18 Al-Wefaq MPs walked out in February 2011 protesting violence against demonstrators.

The summons comes a day after the justice ministry in the Sunni-ruled Gulf kingdom filed a lawsuit to close a Shiite clerics' council, accusing it of involvement in politics, in a new sign of a clampdown on opposition.

Despite a deadly crackdown that ended a month-long protest led by the Shiite majority in mid-March 2011, Shiites continue to demonstrate and clash with police frequently in their villages.

Security forces were alerted that "two suspicious objects" were spotted in the suburb but "after examining them they found the first to be a fake bomb," a government statement said.

"The other was a gas cylinder with a detonator," the statement said, adding that an investigation was underway "to bring the suspects to justice."

The interior ministry also announced on its Twitter page the death of a policeman who had been wounded in a bomb attack on August 17 in the Shiite village of Dair north of the capital.

According to the International Federation for Human Rights, around 80 people have been killed in Bahrain since the violence first broke out in 2011.