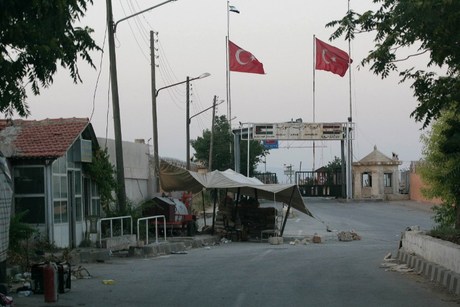 Turkey has temporarily shut its border post after fighting between Syrian rebels and an al-Qaida front group in the northern town of Aazaz, a government official said Thursday.

"The Oncupinar border gate has been closed due to activity and uncertainty on the Syrian side of the border," the official told Agence France Presse, adding that it was a temporary measure.

The Oncupinar border crossing lies across the Bab al-Salam post in Syria, which is not far from Aazaz.

The Islamic State of Iraq and the Levant (ISIS) on Wednesday seized control of Aazaz, activists said, amid increasing reports of fighting between ISIS and non-jihadist rebels seeking to oust President Bashar Assad's regime.

Turkey has so far taken in more than 500,000 Syrian refugees fleeing the civil war in its neighbor but has occasionally closed border crossings for security reasons.

Foreign ministry spokesman Levent Gumrukcu said Turkey had information that the clashes were continuing in Syria but that the situation was not clear.

"We are following the developments," he said at a press conference.

Turks brought nothing to this world but killing and genocide, yet Saudi-culture and its puppets M14 brought them to occupy us for 400 years. When we got rid of them in 1914, the Saudi insisted that our-brothers-in-faith are good people. Well, if honor killing of women is the norm in Saudi Arabia then what you expect them to say about Turkey?